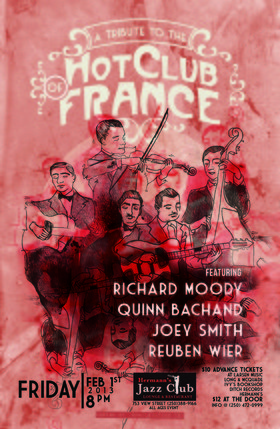 Music: Jazz / Blues
Richard Moody and Quinn Bachand, two of Victoria’s hottest jazz musicians, are teaming up to recreate the magic of Django Reinhardt and Stephane Grappelli for an epic night of Gypsy Jazz music you won’t want to miss! Joining them will be Joey Smith on bass and Reuben Wier on guitar and vocals.

A veteran of the Canadian music scene and considered by some as an underground legend, violinist Richard Moody has delved into almost every style a string player can try. Still in his teens he moved to Montreal and joined the gypsy jazz group 'Swing Dynamique'. Several years later and after a classical music education at the University of Manitoba and the Conservatoire Nationale de Musique in Caen, France, he co-founded the critically acclaimed folk rock group 'Acoustically Inclined', garnering a huge national following. Richard has performed and/or recorded with such artists as the Wyrd Sisters, Joel Fafard, Jane Siberry, Glenn Buhr, Paris to Kyiv and the Manitoba Chamber Orchestra among many. He is currently a member of the Juno nominated band The Bills. Richard's musical interests lie mainly in improvisation, drawing from and combining the many styles and techniques he has learned in his extensive musical travels.

Don`t let his age fool you, with diverse musical talents and a bottomless pool of creativity, sixteen year old Quinn Bachand is an experienced performer, a gifted guitar player and talented multi-instrumentalist who plays a wide range of genres from Celtic to Gypsy Jazz. Inspired by The Hot Club of France, at age eleven Quinn formed `The Djazzkids`, a Gypsy Jazz trio. At the same time he teamed up with sister Qristina to form a critically acclaimed Celtic duo, garnering three Canadian Folk Music Award nominations, three Irish Music Awards nominations, a Western Canadian Music Award nomination and winning two Irish Music Awards for Top Traditional Group and Top Duo. An in demand sideman, Quinn has toured and performed at major Folk and Celtic festivals across Canada, the United States, Europe and Australia with such notable artists as Ashley MacIsaac and Natalie MacMaster.

With diverse musical talents and a bottomless pool of creativity, Quinn Bachand is recognized as the "Young Lion of the Celtic guitar" (Daniel Lapp) and "Canada's top Celtic guitarist" (Ashley MacIsaac). Although Quinn plays a range of styles that include jazz and bluegrass, it is his talents in the world of Celtic music that have drawn much attent... more info