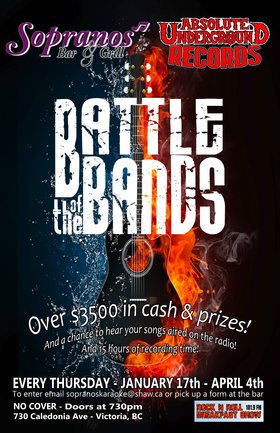 We will be accepting entry forms now until Jan. 17th , 2013.
Entry forms are available at Soprano’s or email [email protected] .

To qualify your band must:
-All be 19 or older.
-Have at least 2 members.
- Live on Vancouver Island.
-Provide name, phone number, and e-mail.
-Submit an input list with entry form by or before Jan. 17th to [email protected]

The band voted by the crowd to be the best of the night will advance to the next round. Winners will be announced on the final night. Keep in mind, the more people bands get to attend, the more votes they will be able to acquire.