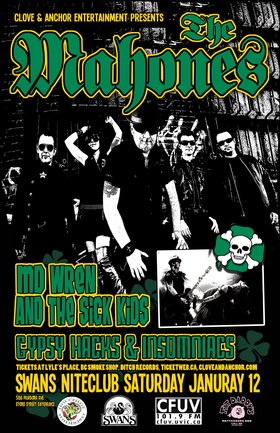 Music: Country / Bluegrass / Rockabilly, Folk / Celtic / Latin / World, Jazz / Blues, Punk / Metal / Hardcore
The Mahones are celebrating their 23rd anniversary and putting out their 8th studio album this November. They're about to embark on a support US/Canada tour with The Dropkick Murphys (3rd in a row) and then on a Coast to Coast headlining run across the country. Joining them are Victoria's own MD Wren & the Sick Kids the infectious experiment in barn-burning, knee-slapping, country cowpunk and Gypsy Hanks & Insomniacs a dark, heavy, folk, gypsy sound that leaves you wanting more! Tickets $11 in advance at Lyle's Place, BC Smoke Shop, Ditch Records & ticketweb.ca.

The Mahones were formed at the end of the bar at the Toucan Irish Pub in Kingston, (Ontario Canada), in 1990 over a few pints of Guinness and a couple of shots of Jamesons Irish Whiskey. It was the brilliant idea of Finny McConnell and his musical mentor Barry Williams to put together a band that sounded like The Clash, The Pogues, The Who, The Wat... more info
Submit info on this show to our admins