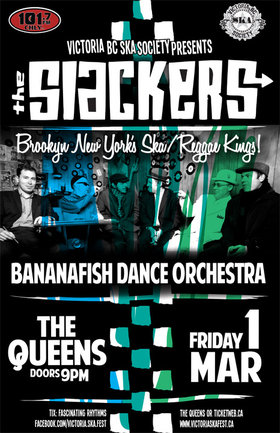 Fri. March 1st 2013 @ The Queens Nanaimo BC (No Minors)
10pm - 2am doors at 9pm
$19.50+ regular adv.
Tickets at: Fascinating Rhythms, Ticketweb, The Queens
Presented by: Victoria BC Ska and Reggae Society

Music: Folk / Celtic / Latin / World, Funk / R&B, Hip Hop / Rap, Jazz / Blues, Reggae / Ska / Dub
The Slackers have been no strangers to the Island over the past 13 years playing in Victoria dating back to the spring of 2000 at the Victoria Ska Festival and at other events throughout the years. But the band has never played anywhere else on the Island but Victoria.

But that is all going to change on Friday, March 1st, 2013 when Victoria BC Ska Society brings the Slackers to Nanaimo for the first time. They'll be joined by Nanaimo's own Bananafish Dance Orchestra. This will be a late Friday night show at The Queen's!

The Slackers have spreading their gospel of "Jamaican Rock N Roll" for 21 years now. While they have been influenced, and even personally taught by Jamaican ska/reggae originators, like the Skatalites and the Upsetters (Original backing band for the Wailers) they play it with a decidedly American accent. Basically, this band is equally appreciative of old blues, country, 60s soul, rock, and Rnb as it is of reggae, rocksteady, dub, and Ska. It is as if the Rolling Stones or the Yardbirds had grown up on Bob Marley as well as Muddy Waters.

Smashing the stereotypes of "ska" as happy,uptempo, and shallow music, the Slackers play with an aggressive edge and their songs veer in themes from the personal to the political. Back in 1996, the NY Times declared the Slackers to be part of "the sound of New York", a mantle they haven't given up since. Ten years later, Alternative Nation stated that their music is "protest music made for dim, sweaty basements, The Slackers would sound at home supporting Rancid as well as some grizzled New Orleans electric blues trio." The LA Weekly wrote about, "their unfettered energy, unerring skankability, and playful anger."

Reigning from Brooklyn NY, The Slackers have been playing their trademark brand ska and rocksteady music since the early ’90s. With a vast collection of albums, The Slackers show no sign of slowing down. They have played over 2000 concerts in 32 different countries. Bandleader Vic Ruggiero calls The Slackers’ sound “jamaican rock n’ roll... more info
Audio: Every Day is Sunday, Close My Eyes, Don't You Want a Man
Articles: Interview with Marcus Geard and Glen Pine of THE SLACKERS, Top 10 Albums of 2012