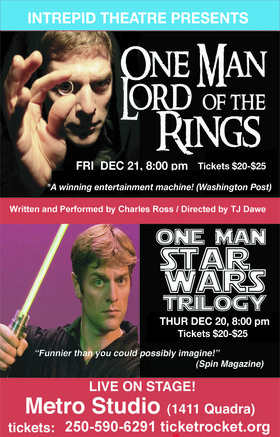 Music: Film: Theatre:
Dust off your lightsabers and brush up on your Elvish: worldwide smash hit Charles Ross is back by popular demand with a 2-day run of his famous one-man shows, One-Man Lord of the Rings and One-Man Star Wars Trilogy at the Metro Studio. Inspired by the popular films, Ross’ brilliant one-man shows have sold out theatres around the world, from Off-Broadway in New York to the Sydney Opera House. The perfect early Christmas gift for the star wars or lord of the rings fan in your family – or you could treat yourself and come see Charles’ One Man Lord of the Rings before checking out the new Hobbit film.