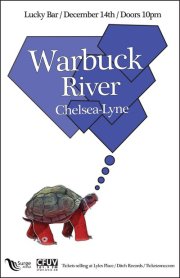 Warbuck is a collective of five souls with little more than time to live and heart to give… Let’s Flash back to the summer in the year of Our Lord, twenty-eleven; the group got it’s feet half off the ground with a few songs and a couple humans that would form its heart… However(!) there would be no smooth intro here folks… Skip forward to late-autumn of that same year and after line-up negotiations, identity crises, song drops, name changes, and intense familiarizing within themselves, the group began writing what would come to reflect a most personal incarnation of Regional Mexican Folk Balladry. The collective end the year of their naissance under the name “Tio Borracho,” fail to hold up their end of a Latin-American showcase and momentarily disband after what can only be described as an intensely human Cowichan Lake sit in. After a short hiatus, the kids emerge in twenty twelve with a new set and style, poised to make their mark.

History aside, the group's sound hovers between 8o's shoegaze / 9o's alternative and is colored with strong vocal harmonies, a tight rhythmic backbone and serious inclinations towards the emotionally charged...

River’s adventurous blend of driving rock, dream pop and roots influences strives for the metaphysical. Hailing from the open skies and minds of Victoria, British Columbia, the Canadian trio has gone from strength to strength with its gigs and EP releases as it builds a global audience. Its just-released first full-length album, Light Up to Burn Out, is a testament to its musical vitality. The self-produced epic spans 18 songs, cataloging the emotive dissonance between man's best efforts to prevail against conquest.

River is comprised of multi-instrumentalists Sam Weber, Marshall Wildman, and Evan Hillier, all of whom share bass, drums, guitar, piano, and synth duties. Together, they command the intellectual post punk-edness of bands like Joy Division, the raw simplicity of early John Hiatt and Bruce Springsteen, while maintaining the gentle emotive grip of acts like Bon Iver.

"River's Sam Weber is an extraordinarily talented songwriter and arranger. Light Up to Burn Out offers expansive, gorgeous pieces that range from the cinematic to pulsing rock territory, and lyrics infused with deep wit and wisdom that reach far beyond his 19 years.”
—Anil Prasad, Guitar Player Magazine/Innerviews

Often when you start a new project there's a temptation to envision a style, an atmosphere to deliver, some sort of musical-thread to follow. I've recorded music for this project for the past three years, test-tubing different strands of soundscapes, and I've never been fully happy representing just one style. So I've created The Raven, a Hydra-like collaboration of many minds and voices. Every singer that joins the project will have their own unique moniker and style, and the music will be ever-changing. The music will always be free and you can find it at theraven.bandcamp.com. More is on the way....

other sites: tumblr
Warbuck was a band that based out of Victoria, BC. more info
Audio: We Can't Be Touched, Lakehouse

River’s adventurous blend of driving rock, dream pop and roots influences strives for the metaphysical. Hailing from the open skies and minds of Victoria, British Columbia, the Canadian trio has gone from strength to strength with its gigs and EP releases as it builds a global audience. Its just-released first full-length album, Light Up to Burn ... more info
Submit info on this show to our admins