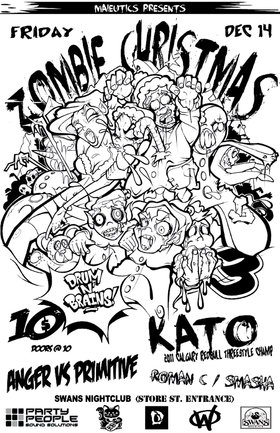 Twas 3 weeks before christmas, and the north pole compound,
Had the elves steady slaving, while santa loser'd, face down.
Making toys for the good, mining coal for the bad,
Unaware, unprepared for the twist to be had.

Impalement like Vlad, Jack Frost's on some evil.
Cracking ploys to infect, by the neck with a needle,
stuffed Teddy, when ready, gets sent back to mingle.
Jingle Hells being written as the seasons first single.

The Teddys skin starts to shingle, as it gets back to the shop,
and contracts to each small folk, with every scheduled stop.
Then as the last starts to cough, the first starts to drop,
convulsing, contorting, rigamorting and rot.
Then reanimate with a need to eat brains off the hop.
soon the flesh starts to fly and the blood starts to slop,
and the horde starts to walk, they make their way past the gable.
The next spot on the menu, Santa's Reindeer stable....

And it goes, bite Dasher, eat Dancer, maul Prancer, scratch Vixen,
chew Comet, tear Cupid, devour Donner and Blitzen.
But who was first to fall?
The most famous Reindeer of all?
Rudolphs glowing snooter led them straight into to his stall....

when the feeding was finished, and the horde had diminished,
Left a dead silent night... but only just for a minute.

The stillness, unhinged by a snarl behind the sleigh,
then more grunts from the messes where 8 more reindeer lay.
They rise to the skies, to fly straight into the day....
This year christmas gwan roll in all dirty to play.

Hailing from the far side of Mable Lake, Kato dedicated many years of training in an intensely disciplined fashion, only rival'd by that of Pai Mei (Kill Bill) to the ancient art of BYMFHOB (Bust Ya Motha Fuckin Head Open Beats). A highly elusive individual known for entering the party in a bright flash of smoke, killing shit for real, and leaving as fast as he came by means of quadruple backflip straight up through the ceiling, leaving nothing but his calling card, an ornamental cat waving a single paw in the air. Not much else is known about the man.

It is believed that in leu of the recent zombie outbreak Kato grew gills and took to underwater living in the Mable lake region, but was thwarted when the fish contracted the virus, possibly nibbling him to death? Another theory is that he may have faked his own demise and taken on the zombie persona in a patient scheme of waiting for the perfect time to strike, but, to strike what? We will see when he gets here.

Both born into the dark shadow of science. They were kept in two separate cages across the hall from each other in the basement of a dingy lab, at the university of Victoria. For 30 years these two Gorilla's were tested on, tormented, tortured and starved for the sake of man kinds medical and aesthetic progress. Over that lengthy period, in their recovery moments, the slight off time of their regular lives, they mastered the art of rhythm by making clicks and clacks on the metal bars, banging breakbeats on the walls and floors, making kicks drums off their scar mangled chests and over time developed evolved bass sounds, much like a hybrid of mongolian throat singing/bassnector. Only they are capable of it.

When the zombies came for them, they weren't having it. Fuelled with 30 years of rage, they managed to tear the jail bars off the hinges, then tear the arms, legs, and heads off the zombie scientists so they could proceed to beat them with their own limbs. They then made there way up stairs and tore all the limbs off next wave of zombies, then made there way outside and tore all the limbs off all the zombies in sight. They have been on a rampage, sorta just blowing off steam, so to speak, since their new found freedom a couple days ago. BUT they are VERY very excited to perform the set they've been developing for the last 30 years, for you, and the other zombies, at swans, on the 14th. Then they might tear off your arms and beat you with them. Consider it a gift....

Patient Zero, Roman C was the first elf to contract the virus, and he will be the last to leave. While many of the other zombie elves froze solid in the frigid northern snows, Roman ripped open Blitzens belly in zombed out efforts to "get amongst" the guts he was about to eat. This resulted in a free flight out of the frozen north, all the entrails he could devour on the way, and a blood lust party night on the town here in Victoria, the Garden city.... Roman C is the Luke Skywalker of the Zombie Elves, F'real...


HUGE THANKS TO JASON WITH HIGH RISK LIFESTYLE DESIGNS FOR SLEIGHING THE FLYER, SHANUS, WHRS, DLD, PARTY PEOPLE, SWANS, AND EVERYONE ELSE THAT BE THROWING DOWN ON THIS ONE!!!!