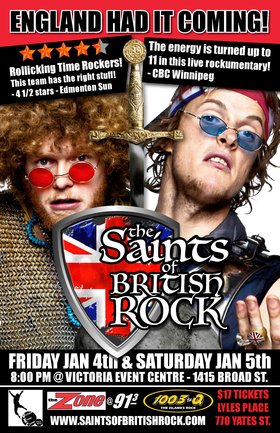 Music: Pop / Rock / Indie, Punk / Metal / Hardcore, Tribute / Cover Theatre:
London U.K. Records, The Zone @ 91.3 and The Q 100.3 bring you a one hour look into the greatest rock and roll band of all time. The Saints of British Rock for TWO NIGHTS ONLY. JANUARY 4th and 5th!

After touring Canada for three months in the summer of 2012 Rocco and Jib are stopping off at the queen's city, Victoria, to pay homage to the most beautiful woman of all time.

"A lot of work went into this material. The off-stage interviewer — the only sane voice here — becomes incredulous as the rock stars make their outlandish claims, but takes it all in stride as we learn such pearls of wisdom as, “There is no wrong in rock ’n’ roll. There is only hard rock and soft rock.”"

Here is a little clip of the band on the Bro Jake show in Vancouver!

Tickets go on sale exclusively at Lyle's place on November 19th. Keep an ear open. Tickets will be given away on both the Zone and the Q.

Rocco and Jib will also be instructing members of the Zone how to rock out live on air. Date: TBA!

The Saints of British Rock (Greatest Band in the World, Man!)

The Saints not only celebrate the British Rock scene of the 1960s and 1970s, they also revel in the mysteries of ancient culture that surround several significant stone structures throughout the British Isles - all through (via) the brilliant use of brilliant rock & roll music. The Saints recently embarked on A Quest to the UNESCO World Heritage... more info
Submit info on this show to our admins