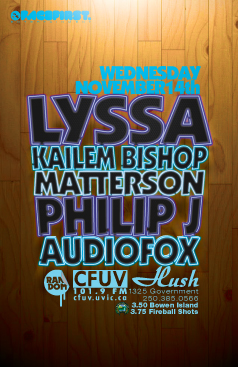 Lyssa is passionate about art, clothing & costume design, music, & dancing. Her first appearance as DJ "Lyssa" took place in 2005. Having spent 11 years in Mexico, and being fortunate enough to be exposed to Latin culture, she has a strong desire to explore her roots in her musical selections. Lyssa's style could be described as sexy, smooth, organic, & classy, depending on what what mood we catch her in, expect anything from funky rolling Chicago house to quirky & bouncy
Latin house..

Lyssa has had the privilege of performing at summer festivals like Shambhala Music Festival, Fozzyfest, Bushwacked, Victoria Electronic Music Festival, Entheos, Uprising, & Solaris. She made Victoria her home in spring 2007, and you can catch her performing at some of the city's coolest lounges & underground hotspots like Hush, The Sunset Room, & Temple.

started his DJ Career over 10 years ago in the Vancouver Nightclub scene, holding residencies at many of the top clubs in Vancouver as well as many after-hours venues and events. Playing everywhere from underground parties, to live radio and television, Kailem has adopted his own pliable style and is one of the most flexible House music DJ’s around. His style has graced countless dance floors and wowed thousands of club goers. Playing an infusion of everything from House, Progressive, Vocal, Electro, Techno, and Tribal makes Kailem very versatile, tailoring his energetic sets to his audiences and clubs. With guest spots in other major urban centers, Kailem has carved out a niche for himself in the Western half of North America as a DJ of choice for any club event big or small.

After being inspired by the countless local events featuring local and international DJ's, Matterson decided to take up the craft himself. Starting with the electro craze of the late '00 era, he first played parties for Sonica Late Nights and Westcoast Funktions where he learned much about the craft. As time moved forward, he started contributing to regional burning man events, growing into a more mature house sound in the process. Reaching into Funky, Jackin and Tech areas of House showcases his ever increasing development.

PhilipJ is a Victoria native with a passion for the outdoors and a Deep Love of House music. At the tender age of 16 Philip was driven to entertain his friends as loudly as possible. In 2002 he first discovered House music, and has spent the years since collecting an impressively diverse selection. 2012 has seen Philip explode on to the Victoria scene opening for DJs like Rennie Foster and Jesse Rose for Hush Nightclub during the Victoria Electronic Music Festival and a monthly residency at Hush. Whether a slice of the Rockies or a mountain of records PhilipJ is sure to come out on top and he isn't afraid to get dirty!

Although relatively new to DJ’ing, Audiofox has been passionate about electronic music for over a decade. Her passion for house and deep house music has become amplified and her excitement to be able to express her musical voice is evidenced by a solid track section. She has had the opportunity to play in venues in Victoria and at Otherworldl in Shawnigan Lake. Househeds, watch out for this sassy fox, she is a firecracker ready to explode!

Brought to you by Face First Entertainment.