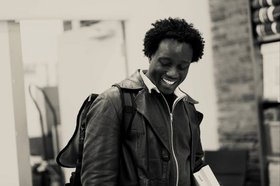 Music: Hip Hop / Rap, Open Mic / Jam / Karaoke
Greg Frankson a.k.a. Ritallin is a Toronto-based spoken word artist, author and arts educator. In 2012, Ritallin was a member of the national champion slam team Up From The Roots (Toronto) and runner-up at the Canadian Individual Poetry Slam. He also is a past National Director of Spoken Word Canada and one of the country’s most respected slam poetry organizers. Greg is the current co-chair for YouthCanSlam, Canada’s new youth poetry slam championships.

Ritallin has released three chapbooks and appeared in several poetry compilation recordings. He published a poetry collection, Cerebral Stimulation, in 2006 with BeWrite Books. His poetry also appears in the spoken word anthologies Mic Check by Quattro Books in 2008 and That Not Forgotten by Hidden Brook Press in 2012. His recordings include the EP Capital Thoughts in 2005 and the full-length CDs Poet Psychology Volume I in 2010 and Volume II in 2011. Since 2007, Greg has been an active voice in the global mental health movement as the Poet Laureate for the International Initiative for Mental Health Leadership. In March 2012, Greg was one of four finalists in CBC’s nationwide search for Canada’s Smartest Person.