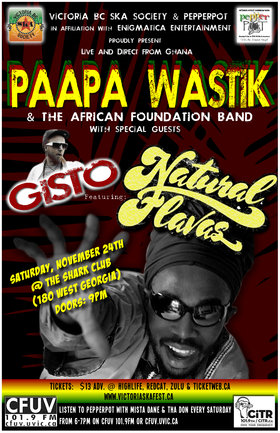 Hailing from Cape Coast, Ghana (Africa) Paapa Wastik has had a rich history growing up with music all around him since he was a small child. During his teen years he found Rasta and went on in the early 2000s to create a brand new musical sub genre in Ghana known as "Roots-Life Music", a fusion of reggae, soca, soul, highlife and African classical/traditional music. In 2003 Paapa Wastik was invited to perform at the annual "Panafest", an internationally acclaimed Pan-African Festival. Within the same year the international reggae production group "Greenlion Sounds" teamed up with Paapa Wastik to produce some songs, which was featured on "Greenlion in Ghana" CD mix. Making progressive steps in his talent and music mission, Paapa Wastik crossed over to the United States where he established an independent record label, Asaase Music Foundation.

For the past ten years Paapa Wastik has been traveling in between Ghana, Africa, Jamaica and the United States producing and performing alongside various artists some of which include: Anthony B, Lutan Fyah, Capleton, Tony Rebel, Queen Ifrica, Warrior King and many more.

Notable appearances include Paapa Wastik's headlining appearance at the Northwest Reggae Festival in Eugene, Oregon and another unforgettable appearance at Victoria's 8th Annual Ska Festival at Market Square alongside Mexico's Los Rastrillos, Jamaica's The Itals, The Drastics and the now defunct Arbutus Trio.

Now Paapa Wastik and the African Foundation Band have a new album called "Unity for Africa" His appearance after a five year absence from Canada is in support of this album.

Gisto was the man without a plan and just followed his heart straight to Jamaica as he felt feeling an increasing urge to connect with the music and culture on the Island. Almost upon arrival he met Dre, Zee who was a respected producer in Jamaica. Dre. Zee introduced him to other producers such as Clifton "the specialist" who produced albums for Tony Braxton and Rihanna. His introduction to these producers also led Gisto to meet Lutan Fyah and record some tracks with him while he was in Jamaica. When you take Gisto's already multi-talents that he had as an artist in his own right playing with Waasabi Collective and then you mix it with his passion for dancehall and reggae music you'll get a solid mix. Watch for Gisto's upcoming release that he has been working on for awhile.

NATURAL FLAVAS is an original band while also working as a backing band for touring artists. Under their own name Natural Flavas produces original reggae that parallels the current Jamaican scene while remaining uniquely Canadian. They’ve gained quite a reputation locally , opening for Toots & The Maytals , Inner Circle , The Easy Star All-Stars and emerging Jamaican stars Rootz Underground on their first appearance in Western Canada. As a backing band Natural Flavas have sealed their connection to the roots of reggae over the past few years, backing Jamaican legend Ken Boothe , Tosh1 - youngest son of original Wailer Peter Tosh, and Canadian reggae star Steele. Band Leader/ Singer/ Guitarist , Patrick “Dr.Watson” Quine , has also had the pleasure of playing bass for Jamaican stars Alton Ellis and Half Pint as well as a “who’s who” of artists from Canada’s large Caribbean community. Some of Vancouver’s finest - Allan “Double Down” Ollivierre (Keys) , Jonny “Jon Boops” Holisko (Drums) and J.C. “Coop” Thompson (Bass) round out the core of a line up that ranges from 4-8 people depending on the size of the stage. The future looks bright for Natural Flavas, who are set to release their first full length album ! As we say “No artificial additives - 100% Natural Flavas.” !!

Paapa Wastik brings us reggae/dancehall sounds live and direct from Ghana, Mount Zion, Africa. With his new album "Thanks and Praise" coming on Tuff Gong this summer and doing tracks with Jamaica's Lutan Fyah Paapa Wastik is a treasure waiting to be discovered. more info
Audio: Woman

other sites: myspace
NATURAL FLAVAS is a unique project , simultaneously an original band while also working as a backing band for touring artists. Under their own name Natural Flavas produces original reggae that parallels the current Jamaican scene while remaining uniquely Canadian. They’ve gained quite a reputation locally , opening for Toots & The Maytals , Inner... more info
Audio: Time
Articles: In Your Facefest!
Submit info on this show to our admins