In just a few short years, The Funk Hunters have built an international following, releasing music on labels around the globe and showcasing their signature high-energy DJ sets at some of the world's most popular music festivals and clubs. The duo (Dunks & The Outlier) first teamed up because of a mutual love for "Hunting" good music, and today this passion still rings true as they continue to champion the simple but often lost idea that the music itself comes first, regardless of attachments to genre. The Funk Hunters name is now in high demand, receiving bookings, accolades, and remix requests from all corners of the electronic music scene.

Armed with 4-turntables and the unique ability to create live mashups and remixes, their DJ sets standout. Seamlessly blending original productions with everything from HipHop to Funk, Disco to House, Dubstep to DnB, and everything in between, The Funk Hunters create original sets never replicated. It's not uncommon to find this duo headlining an all bass music festival one night and then performing a funk, soul, or boogie set the next. They have toured across Canada multiple times, played to crowds of thousands at renowned festivals such as the Shambhala Music Festival and the Telus World Ski & Snowboard Festival, and have been invited to share the stage with musical pioneers like Z-Trip, RJD2, and Cut Chemist. In 2010, they completed their first month-long international tour, playing shows across the country of Brazil. 2012 will see them complete their first tour of the UK & Europe.

On the production front, their original music and remixes have been played around the world in clubs and on radio-stations alike. Signed to Ghetto Funk, Roca Records, Fort Knox Recordings, Manmade Records, Homebreakin Records, and Swing Set Sounds, The Funk Hunters' releases prove again that their musical taste and influence spans all genres. They've now just launched their own label, ReSoul Records, to distribute future releases while still maintaining close partnerships with labels like Goodgroove Records (UK) to produce their own acclaimed events that bring international talent to Canada.

Despite being a relative newcomer to Victoria, Outsider has quickly made himself a fixture in the local electronic music scene. The drum-and-bass DJ also known as Jon Camilleri is a versatile beat connoisseur with an uncanny ability to read a crowd, whether they’re downtempo diners at a lounge or frenzied festival-goers.
Relocating to the Island in 2009 after growing up and cutting his DJ teeth in Toronto, Outsider has shared the stage with world-class acts like Andy C, Aphrodite, High Contrast, Rusko, 12th Planet, Distance and Benny Page, to cherry-pick a few names from his impressive gig resume. He’s rocked pretty much every major electronic music festival on Vancouver Island (including closing for Dieselboy, Dirty Phonics and TC in the 2009 and 2010 editions of the legendary Soundwave Music Festival), and regularly headlines his own gigs, both on the road and in Victoria. He can also be found behind the decks as a resident for both Whitebird and sub|division, Victoria’s foremost pusher of bass culture. In the club, he is a surgeon in the mix, clipping along flawlessly from track to storming track, able to blend ol’ skool amen-laden flavours with modern envelope pushers.
Don’t let the name fool you: with his eclectic taste in tunes and nearly a decade of experience as a DJ, Outsider is definitely in on a lot of musical secrets. 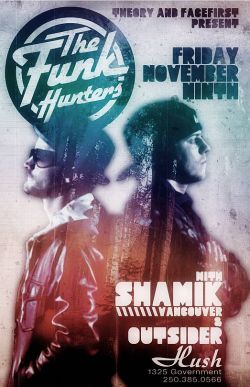