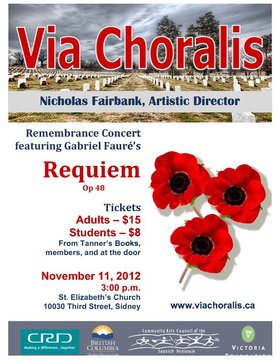 “Pie Jesu” from the Requiem will be sung by young Victoria soprano Gwendolyn Jamieson, who has sung for five years with Viva Youth Choir and recently was invited to join the adult women’s choir Ensemble Laude, one of the youngest ever members of that choir. She has performed as a soloist with the early music ensemble, A Great Noyse, on several occasions, and recently attended as the youngest participant at the Historically Informed Summer School in York, England.

Artistic Director Nicholas Fairbank divides his time between teaching, performing, composing, conducting and adjudicating. He is currently on the faculty of the Victoria Conservatory of Music, Artistic Director of the Viva Youth Choirs, an Examiner for the Royal Conservatory of Music and an Associate Composer of the Canadian Music Centre. He is often seen locally or further afield as a collaborative pianist, harpsichordist and organist, conductor or singer (as the baritone in the vocal ensemble Hexaphone). As well as earning Associateship diplomas in organ performance from the Royal Conservatory and the RCCO, Mr. Fairbank has Masters degrees from the University of Paris (musicology and French literature), the University of California at Santa Barbara (French language and pedagogy) and the University of Victoria (music composition), where he won the Martlet Music Award for Excellence in Advanced Composition. His works have been performed across Canada, the USA and Mexico and in Europe.

Accompanist Braden Young studied piano performance focusing on collaborative piano at the Victoria Conservatory of Music (AVCM 2009) and the University of British Columbia (BMus 2011). He has also pursued studies in voice and in composition, and has been the recipient of numerous scholarships and awards for academic excellence as well as performance. His teachers include Corey Hamm, Jamie Syer and Robert Holliston; he has also attended master classes with Rena Sharon at the Vancouver International Song Institute.

VIA CHORALIS, a community choir based in Sidney, BC, was founded in 1999 by Elizabeth Shannon and since 2005 has been directed by Nicholas Fairbank. Programming is eclectic; the choir performs a wide range of music from Renaissance madrigals and choral classics to contemporary Canadian repertoire. Besides our own concerts, Via Choralis has also enj... more info
Submit info on this show to our admins