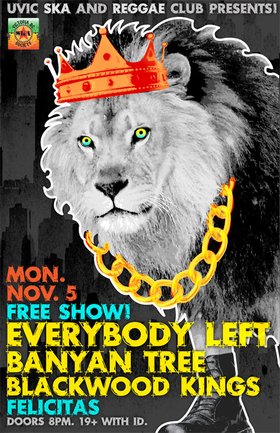 Music: Funk / R&B, Pop / Rock / Indie, Reggae / Ska / Dub
In case you haven't heard the good news, on September 12th the first ska and reggae club in the history of the University of Victoria was born! Now with more than 100 members already signed up, a kick-off party is in order.

As a part of Felicita's Free Island Band Mondays, the UVic Ska and Reggae club is proud to bring you a free show featuring some of the best music in the local scene.

Everybody Left play a Left Coast/Dirty Pop with a reluctant Reggae/Post-Ska/Bluesy sound. Their ongoing mission: to bo
ldly and successfully venture into the new music frontier of the 21st century. Although they've put their band on the back burner for the time being they're just resting... ready to lay it down for their fans once again. Everybody Left have played at different events such as V.I.C Fest and Victoria Ska Festival. Their music is known outside ska/reggae circles as their hit "Down for the Ride" continues to enjoy heavy rotation on radio stations such as The Zone @ 91.3FM.

Support for the show will be provided by Banyan Tree and Blackwood Kings.