The British Columbians are a rock & roll band from Vancouver, Canada

Conceived just out of high school, mutating numerous times under various personas, Man Made Lake erupted for the first time in the non-typical setting of Communist China. It was here that front-man, Colin Craveiro, keyboardist, Nate Bailey, and former lead-guitarist, Sean Morton, played the part of kindergarten teachers. They soon met Cole Waidley, and convinced him to pick up the bass and fill the needed role for their band. It seemed kismet when their globe-trotting paths came across local Chinese punk-rocker, Wu Wei, who would later introduce the boys to drummer Lao Song, and Man Made Lake would be complete.

After a crazed year playing around mainland China, Sean and Song stayed behind, while the remaining three returned west. Back home in Canada, MML have metamorphosed once again, into something of a folk-rock lyricism, which both lulls and pulses.

Accompanied by original member, Brent Gosse on keys, and guitarists John Flatman, Riley Smith, and Steve Parker, the group have been quick to stir things up in their hometown of Victoria, B.C., after previously opening for the likes of such house-hold names as The Great Lake Swimmers, The Thermals and Reptile and Retard.

With Morgan Hradecky on drums, MML have proven the concept of reincarnation with this tremendous re-birth. Building upon the organic mystique of their 2009 album, Drink from the Sea, and their revolutionized, made-in-china, self-titled album of 2010, the new 2012 album Murky Waters is available for purchase. 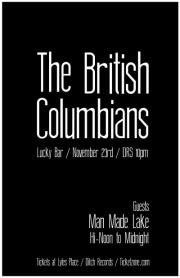