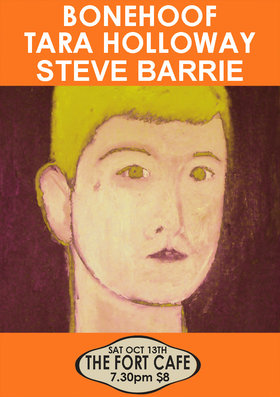 TARA
‘Voices like this don't come along every day, but thanks to the annual South By Southwest musical extravaganza in Austin, Texans are about to get a good look at Tara Holloway. They aren't likely to forget her, either. Critics are calling Holloway a folk/blues/punk/rock singer/songwriter in a futile attempt to describe something that really defies description.' North Texas News

STEVE
Steve earned his reputation as a killer guitarist, playing the role as the axeman for many years. Countless gigs and tours under his belt Steve has totally reinvented himself and is quickly making a name as a Singer/ Songwriter to be taken notice of. Unpretentious and singing about whatever comes his way.
Citing influences from the Buzzcocks to Bruce Cockburn, Steve won't be held to one style but definetaly has a sound.

Some artists punch the clock. For others, like Tara Holloway, the membrane between performance and life is thinner, if it’s there at all. “My fans think they know me, and they really do know me,” says the Canadian-bred singer-songwriter. An inveterate road dog and seasoned couch-surfer who was bounced between Ottawa and Vancouver in her yo... more info