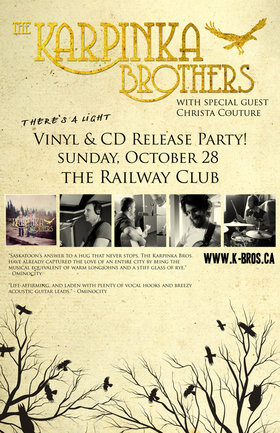 Music: Pop / Rock / Indie Theatre:
Sunday, October 28th: Karpinka Brothers, Christa Couture, Redgy Blackout
“Saskatoon’s answer to a hug that never stops, The Karpinka Bros. have already captured the love of an entire city by being the musical equivalent of warm longjohns and a stiff glass of rye.” - Ominocity
The Karpinka Brothers played at their hero Gordon Lightfoot’s recent Saskatoon show, where Gord asked their parents, “Are these guys any good at all?” His fans’ hearts were won by their songs, songs that Exclaim said “hearken back to the roots of rock’n’roll,” along with harmonies and charming banter that only comes from brothers who are obviously the best of friends. Their debut album ‘One Brick At A Time’ charted nationally on campus and community radio, and this show is the local release for their much-anticipated follow up ‘There’s A Light,’ which Ominocity raved was “life-affirming” and “laden with hooks,”.
k-bros.ca
http://redgyblackout.com/
Doors 7:30 PM, Cover $8

Singer and multi-instrumentalist Scott Perrie and guitar/banjo player Jeremy Breaks have been perfecting their collaborative craft since they met at an open jam in Vancouver. Both came from musical backgrounds, Perrie through the theatre and his grandfathers ‘61 Gibson J45, and Breaks through growing up in his father’s music store in Prince Geo... more info
Audio: Bottom of the Sea
Submit info on this show to our admins