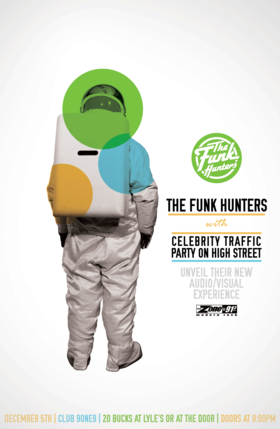 Music: Electronic / DJ, Funk / R&B, Hip Hop / Rap, Pop / Rock / Indie
London U.K. Records and The Zone @ 91.3 are proud to bring you one of the biggest nights to hit Victoria in ages featuring The Funk Hunters, The Party on High Street and Celebrity Traffic. Tickets are $20 at Lyle's Place or online at http://www.eventbrite.ca/event/4936018765

THE FUNK HUNTERS are arguably one of Canada's busiest electronic acts. Performing their signature high-energy DJ sets and groundbreaking Audio-Visual show at some of the world's most popular music festivals and clubs has earned them an
international following. On stage, their live show stands out. Armed with 4-turntables, their very own custom synched visuals, and the unique ability to create live mashups and remixes, they seamlessly blend original productions with everything from Hip Hop to House, Glitch Hop to Drum & Bass, and everything funky in between. They also continue to release chart topping music on labels around the globe as well as manage their own label, ReSoul Records, pushing new sounds found within Canada's electronic scene out onto the international stage.

THE PARTY ON HIGH STREET - Delves into the many vibrant, melodic and rhythmic colors of funk-rock, reggae, jungle grooves and lush psychedelia. The Party's songs of peculiar life-experiences, travel and the far-out are inspired by youthful energy and embellished with rocking blues grooves, jazzy feel-good improvisation and mid-song funk-downs. http://www.facebook.com/thepartyonhighstreet

CELEBRITY TRAFFIC - In an effort to seem bigger, badder or better, many bands declare their legacy is founded on fate, supernatural intervention or destiny. When it comes to the formation of three year-old Victoria, British Columbia based rock-infused, funk-sparked electro trio Celebrity Traffic though, there's no such baloney.

Forged on loose rehearsal hall fun that eventually graduated into full-fledged songs, as with many enduring musical legacies, Celebrity Traffic finds three friends not ready to kill their collective creativity; bonding over a musical moment of “screw it.”

The Party on High Street (Funk)

other sites: cbc
Since finding each other in Nelson, B.C. seven years ago The Party On High Street has worked tirelessly to bring it's signature feel-good funk jams to the people! We are a lively dance-inducing mix of funk, folk and jazz fuelled rockn' roll, joyfully delivered and presented like a funbomb waiting to make you jive. Our band sings of peculiar youthfu... more info
Audio: Bonzai, Second Hand, Jazz
Videos:

The Party on High Street - Bonzai