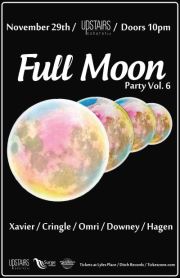 This is going to be a special Full Moon Party - We are decking out Upstairs with visuals, body paint, and bucket specials. Not to mention a 5 dj line up..

Passion and energy combined with a love for music allows DJ Omri to electrify the dance floor and mesmerize crowds. The Israeli born DJ/producer has won several DJ competitions on Vancouver Island and in Vancouver, and has generated an ever increasing following, earning him several residencies over the last year in Victoria and Vancouver. In recent months Omri has played alongside international acts such as Paul Anthony, Felix Cartal, Harvard Bass, Wolfgang Gartner,and Fedde Le Grand, to name a few. Omri’s desire to advance his skills combined with his unmistakable talent makes him one of Canada’s most exciting up-and-coming DJ’s. More recently, Omri has been nominated to win the Best New DJ category in the Victoria Nightlife Awards. Be sure to check out this sound and experience the high-energy and excitement of these sets.

Xavier's energy behind the decks is like no other.. He strongly believes that it's always 50% stage prescence, 50% skill and of course 100% track selection. Since 2001, his goal has been to make sure that you experience first hand what a ridiculously good set is all about. He surges out waves of party rocking breaks, disco synths and electro hooks, mixing everything flawlessly, while mashing in acapella's..

It's 2011. 50+ parties, 100+ opening gigs and a couple headlining slots later and Xavier is pushing boundaries more than before, and with his Breakbeat partner, Wes Beanz. As W.A.X and by himself, Xavier has shared the stage with international stars like A Skillz, Stanton Warriors, Alex Metric, NAPT, The Freestylers, Chase & Status, The Breakfastaz, Treasure Fingers, Dilemn, General Midi, Hook N Sling, Busta, Farace, Pimpsoul, Atomic Hooligan, DJ Quest, Baobinga, D.I.M. & Shimon.. Do not miss seeing this kid rock the stage. When he gets going, It's unparalleled to anything out there.

I love photography and music. I've been an event photographer for 6 years now. I'm working towards portrait photography and I also love doing festivals! I have been a Dj for 10 years. I mainly specialize in breakbeats but I also tend to venture in disco house and sometimes electro.. I've played at several festivals and dozens of parties and club nights.. I love rocking a dancefloor :) I guess my goals right now would be travel and saving for school.. I LOVE Electronic Music.. and if you ask me about it, I will tell you what I love about it and I'm sure show you something that you would like too.. It's very easily misunderstood.. and no, I don't "listen to techno" ;) I guess I can say I was brought up by an amazing mother.. I appreciate people for who they are and have lots of love to give.. I have worn my heart on my sleeve at times and it's caused me to get hurt but I've learned overall in the process of life and love..

Hagen:
https://www.facebook.com/djsamhagen/info
Sam is an up and comer in the Victoria scene. Originally from the mainland, the island caught his eye and he hasn’t looked back since. He has opened for huge acts such as Porter Robinson, Morgan Page, JFK (of MSTRKRFT), Felix Cartal, Congorock, AN21 & Max Vangeli and many more, solidifying his presence in Victoria. He now holds a weekly residency at Boutique Lounge and continues to impress with his ability to captivate dancefloors. His style can be best described as highly energetic and this is seen throughout his live performances. Sam’s love of electronic music has now allowed him to expand in to the world of production. Look out for some original productions and remixes in the near future.