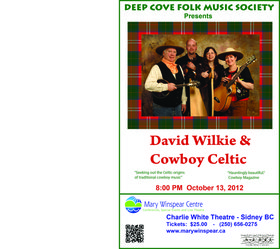 Event Archive - “This is more than music. It’s theatre and imagery and history and storytelling and more, all wrapped up in sagebrush and tartan.”: David Wilkie & Cowboy Celtic

David Wilkie, the founder of Cowboy Celtic, started tracking down the roots of cowboy music more than 16 years ago. The premise is that cattlemen from Scotland and Ireland, whose industry dates back hundreds of years, brought their culture and musical traditions with them when they moved to North America.

The music of Cowboy Celtic demonstrates that those traditions live on in the music of today. The stories of love and loneliness, lawbreakers and lynchings all reflect the very real world of both the Scottish drovers and the North American West. The connection is in the stories and in the music. You might recognize it in the traditional songs, in old tunes with new lyrics, or in Wilkie's original material.

Cowboy Celtic, centered in Alberta, includes David Wilkie on mandolin and vocals, Denise Withnell on guitar and vocals, Keri Lynn Zwicker on harp and vocals, Joseph Hertz on fiddle, and whenever possible, Nathan McCavana on bodhran and vocals. The group is in its 17th year, and they spent part of last summer touring Ecuador and Peru. They have recorded six CDs, the second of which (Cowboy Ceilidh) won the Oklahoma City National Cowboy Hall of Fame Wrangler Award for Outstanding Traditional Western Music Album in 1999.

“This is more than music. It’s theatre and imagery and history and storytelling and more, all wrapped up in sagebrush and tartan.”