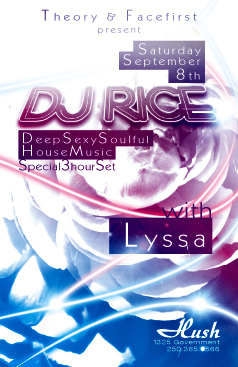 DJ Rice, that name sounds familiar. Well it should, DJ Rice has been Pumpin' out Sweet Sounds to Dedicated Listeners since 1989. During these nearly 2 decades, the style of music DJ Rice has expressed has gone through various changes. DJ Rice has played everything from R&B, Funk, Hip-Hop, pioneering a Techno rave scene in Calgary, to finally spinning his true love, House music.
DJ Rice was born and raised in Calgary. This makes him extra proud to have won Calgary's Fast Forward Magazine, Best of the Best Readers Choice Awards in the category of Best DJ since 1999. He has also won Best DJ Night in 2005, for his long running club night, Sunday Skool. With such a vast number of musical styles and experiences comes a large record collection.
Probably an Upwards of 10,000 pieces of Vinyl surround DJ Rice in his Studio. One may wonder why you would want to keep all of those old, out of date tracks around, but to DJ Rice every single one is a classic or a memory that he can pull off the shelf anytime he deems fit. Where has DJ Rice used this huge collection of his? One place was at a Radio show on CJSW 90.0FM, called the Power Move with Tim Okamura. DJ Rice has also had residencies in a wide variety of Calgary and area Lounges and Nightclubs. Some of these include places such as The Republik, The Banke, Deluxe Lounge, Kisaten After Hours, Empire, Orbit, The Embassy, The Night Gallery Cabaret, Aurora, The Ship and Anchor, Cherry Lounge, The Venue, Noname Lounge, and HiFi Club just to name a some of them. At many of these locations, DJ Rice was the first DJ to have a night dedicated to live DJ music.
Though very proud to still use vinyl, DJ Rice embraces the use of MP3as it is quickly becoming the industry standard. The Internet has also brought another level to DJ Rice, he is very proud to be a member of Calgary Soul. This is a great tool for event listings, information on DJ's and it also brings free mixes to the interested public and loyal followers. Log on and listen or download until your hearts desire. DJ Rice is dedicated to those who come to listen to him and in return he plays his heart out to those who choose to listen.

Lyssa is passionate about art, clothing & costume design, music, & dancing. Her first appearance as DJ "Lyssa" took place in 2005. Having spent 11 years in Mexico, and being fortunate enough to be exposed to Latin culture, she has a strong desire to explore her roots in her musical selections. Lyssa's style could be described as sexy, smooth, organic, & classy, depending on what what mood we catch
her in, expect anything from deep rolling Chicago house to quirky & bouncy Latin house..

Lyssa has had the privilege of performing at summer festivals like Shambhala Music Festival, Victoria Electronic Music Festival, Entheos, Uprising, and Solaris. She made Victoria her home in spring 2007, and you can catch her performing at some of the city's coolest lounges & underground hotspots like Hush, The Sunset Room, Whitebird & Base Lounge.


Brought to you by Theory & Face First!