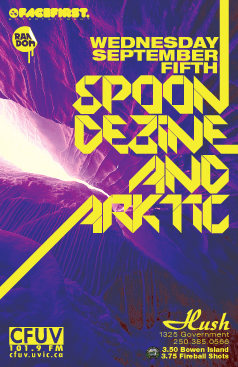 Spoon, moving dance floors all across Vancouver Island with his mixed varieties of Drum n Bass and Break Beats. Starting his DJ career in 2004, Spoon has quickly rose to be one of the Next Up and Comers, affiliated with some of the larger Break Beat promotion crews, Breakbeat Island, 4the Music, 420 Kru and DB mint. Your not gonna know what this boy is gonna throw at you next, he is not one to be missed!

Exploding onto the west coast Drum n' Bass scene Matt 'Dezine' has been bringing a Soulful Fusion of Sexy, Dark Funk to dance floors all over Vancouver Island. Making his start behind the scenes with sound and lighting tech, Dezine found that the heart to Drum n Bass was sadly missing in todays music so something had to be done! In just under a year he has opened for the likes of Freaky Flow, DJ [email protected], CronikAl, and dominated the beaches at last summers Soundwave festival. Dezine has also been deep in the studio banging out his own brand of self produced tracks. Expect to see some full releases from this beat designer early next year.

Arktic is deep, rhythmically driven UK bass music. A DJ and producer, hailing from Victoria, BC, Arktic is part of the Cloudsounds Electronic coalition. He holds a weekly spot on CFUV 101.9FM, showcasing a multitude of guest DJs and producers in the Canadian electronic scene. As a DJ with a love for vinyl, Arktic participates in the lost practice of dubplate culture, cutting his original tunes to acetate, and incorporating them into his live DJ sets. Don't miss a chance to catch Arktic for an opportunity to see unique, UK beats with a west coast flavour.


Brought to you by Face First Entertainment

other sites: mixcloud
Don't be fooled by his crisp, dark beats, Arktic's not that cold. If you've ever caught that smooth, sultry voice on CFUV 101.9FM, then you know he warms the soul. Representing the Urban Therapy crew in Victoria, he regularly appears in venues throughout Victoria, including Lucky Bar, The Mint, and Cenote Lounge. A former resident DJ with the Cl... more info
Submit info on this show to our admins