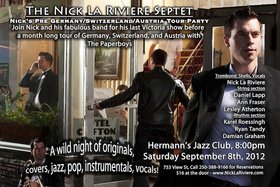 This is Nick's last Victoria show before heading out on a European tour for a month with The Paperboys, so this will be the pre-tour party.

It's going to be a fun show with a good mix of jazz, but also an emphasis on music that's just plain fun! The show features everything from Chick Corea to Sam Cooke to Jamiroquai, as well as originals by Nick La Riviere. A great variety of tunes played by the area's top musicians. There's no other show like this one, and audiences are always thrilled with the caliber of performance and the depth of the arrangements used.

Bonus!
Hermann’s will be serving
bratwurst and delicious
German beer in honor of
Nick’s upcoming tour to
Germany. So drink up

Reservations are highly recommended! Call 250-388-9166 and leave a message with your name and the number of people in your party.

Trombonist Nick La Riviere plays music from his debut album, Too Much To Do. This unique album features an excellent rhythm section, as well as a three piece string section (two violins, cello) and has been called exuberant, multi-faceted, humorous,outgoing, and just fun. The music is a mix of original compositions and unique arrangements. This wil... more info
Submit info on this show to our admins