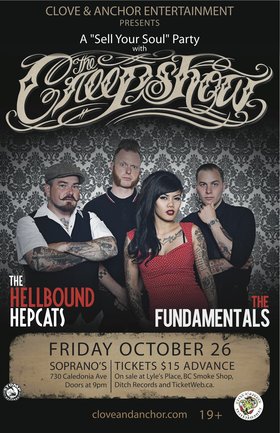 Formed in the dirty back alleys and dive bars of Toronto, Ontario in 2005, THE CREEPSHOW has redefined the saying “No Rest For The Wicked”. Since their inception, the band has brought their genre-defying blend of country-tinged, psycho punk rock n’ roll to over 25 countries worldwide with plans to conquer many more as soon as possible. With some exciting new members KENDA on guitar and lead vocals and Sandro Sanchioni on drums. THE CREEPSHOW is an explosion of live energy that is a tasty treat for the ears and eyes alike… Whatever you do, don’t you dare write them off as just another psychobilly band. While their lyrics draw inspiration from b-movies and early horror films, they’re also full of intriguing insight and personal stories dealing with everything from addiction to anxiety to love gone terribly, terribly wrong.

Since forming in 2008, The Fundamentals have worked tirelessly to bring their unique sound and exciting live show to audiences everywhere. Their music recalls the rhythms of 1960s Jamaica, with roots firmly planted in the traditions of early ska, rocksteady, and reggae. The seven-piece ensemble combines these influences with an abiding love of blues and soul, and an attitude that is pure rock’n’roll, making sure every audience member and listener has an unforgettable time.

The Hellbound Hepcats are bringing back the sound of the 1950's with an aggressive, big-beat twist-seamlessly fusing elements of Johnny Burnette, Chuck Berry and Brian Setzer with the pure energy of rockabilly. These hardworking rock'n'rollers combine the rawness and passion of the Sun Studio sessions with a harder, faster, more hip-shaking rhythm that is all their own. The Hellbound Hepcats' music reflects the rebellious spirit of early rock n' roll without imitating it. Their originality adds a much-needed new spin to the current rockabilly scene.

ZOMBIES! GHOULS! HAUNTED HOUSES AND TATTOOED PSYCHO GIRLS! Enter if you dare(!) into the world of Southern Ontario’s Horrorbilly sensation THE CREEPSHOW. A group whose fiendish mix of 1950’s influenced rockabilly, and punk rock energy will have you shaking your hips, singing along and quite possibly howling at the next full moon! From... more info

Since their first meeting in late 2009 as five strangers nostalgic for the glory days of Canadian ska, The Fundamentals have morphed and multiplied into the eight-piece ensemble they are today. No strangers to the stage, The Fundamentals have shared a bill with such internationally-recognized acts as Subb, Mustard Plug, the New York Ska Jazz Ensem... more info
Audio: Leaving Me Behind, Kitchen Floor
Submit info on this show to our admins