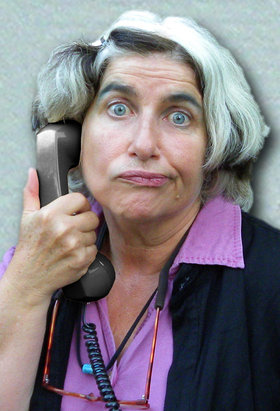 In "Zero Tolerance: Sex, Math and Seizures," Barbara Selfridge, at age 49, is asked to institutionalize her somewhat-estranged and more-than-somewhat-strange mathematician father. Selfridge the daughter, however, has never forgiven her father for the institutionalization, at age 11, of her brain-damaged sister. Yikes! The story also includes Selfridge's surprisingly witty sister, surprisingly racy mother, and two conferences: one for number-theorists and the other for social workers dealing with "Abandoned Daughters" like Selfridge. Double-yikes!

"Barbara Selfridge is what a writer should be: truthful and brazen and attentive to pain" -- Grace Paley.

"Zero Tolerance" is Barbara Selfridge’s first Fringe effort. She is a writer & performer from Oakland, CA. She works with Theatre Unlimited, a troupe that features actors and playwrights with developmental disabilities; Stagebridge, a troupe featuring senior story-tellers; and the Marsh, a Bay Area Theatre for developing new work. Her sister, Margaret Selfridge, sings back-up with the Magic Makers, a special needs rock band. Barbara says that she aspires to match her sister’s on-stage enthusiasm. She also hopes to shine a light on our medical system’s unspoken need for family advocates.

"Zero Tolerance" was developed with and directed by David Ford, artist-in-residence at the Marsh.