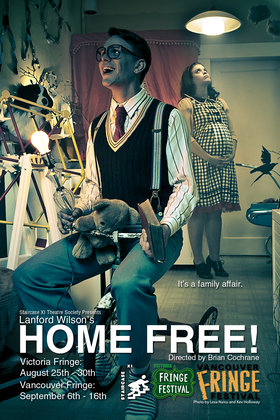 Music: Theatre:
VICTORIA, BC: Home Free! (with Jason Clift & Maryanne Renzetti) is an evocative dark comedy filled with fun, adventures and surprises. Worlds collide when a brother & sister, living as a married couple, are faced with a problem they’re unable to navigate via the make-believe reality they’ve created for themselves. This haunting story is one of the earliest works of celebrated American playwright Lanford Wilson.

Playwright Lanford Wilson was the author of 17 full-length and 30 short plays. Often compared to Tennessee Williams, his plays often explore themes of alienation, loneliness, and crumbling illusions. He’s received numerous awards including the Vernon Rice Award for Rimers of Eldritch (1965), the New York Drama Critics' Circle Award and Obies for Hot L Baltimore (1973), and The Mound Builders (1975). He has won multiple New York Drama Critic's Circle Awards and a Pulitzer Prize for Drama (1980).

Director Brian Cochrane hails from Saskatoon, where he started the Skinny Walrus theatre company in 2004. Since moving to Vancouver in 2009 he has directed the Canadian Premiere of Love/Stories and assistant directed House/Home (Pi Theatre). Brian recently won a Jessie Richardson Award for his work in The Bomb-itty of Errors, and he just finished assistant directing King John at Bard on the Beach.

In Home Free! Lawrence and Joanna, a brother and sister, have cut themselves off from the world “outside,” living in a cluttered playroom which they share with two imaginary companions, “Edna” and “Claypone”. They have created an atmosphere of almost suffocating intimacy and remove, where play becomes the business of life and reality an alien force to be kept at bay.