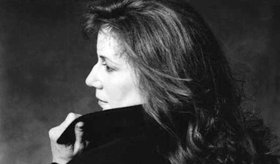 Event Archive - "Her voice is like the California weather, filled with sunlight. But there’s an earthquake behind it." – Leonard Cohen: Jennifer Warnes

Music: Folk / Celtic / Latin / World
"Her voice is like the California weather, filled with sunlight. But there’s an earthquake behind it."
– Leonard Cohen

Jennifer Warnes is one of the most renowned singers of our time, whose voice is one of the loveliest instruments in contemporary music. As a solo artist or a duet partner, on albums or in movies, Warnes sings it straight from the heart. Her voice is pure. The emotions it conveys are pure, too.

"To this day, I'm not as interested in music as people think," says Warnes. "I'm more interested in how close we can get through the music."

Warnes has recorded songs that have won both Grammys and Oscars, songs that topped the pop charts and honored the most subtle aspects of art.

Her smash duet with Joe Cocker, Up Where We Belong, is a defining example of her vocal majesty. Yet Warnes is an artist with extraordinary emotional range. Her collaborations with Leonard Cohen – on his records, as well as on her classic album Famous Blue Raincoat – have a haunting, delicate beauty to them. For all the power and command in her voice, Warnes' singing reveals great emotional vulnerability. This is most evident on her latest CD, The Well.

Born in Seattle, Warnes was raised in Anaheim, California – when there was still the scent of citrus in the air, before Disneyland changed the character of the community forever. She describes the very atmosphere of her childhood as musical. "All the women in our family – my mother and my grandma and my aunts, cousins, my great aunts and my three sisters – had the most melodic way of talking and laughing. Their voices were rich with expression," she says.

In 1968 – at age 21 – Warnes joined the cast of the Smothers Brothers Comedy Hour, a ground-breaking variety show that wore its left-leaning political spirit and love for music with pride.


In one of her first shows, she performed two songs a capella with Donovan in an episode that was nominated for an Emmy Award. During the same period, Warnes landed a lead role in the Los Angeles production of the rock musical Hair. The first of Warnes' eight solo albums was also released in 1968. As a young singer, she had several hit singles – including Right Time of the Night, which peaked at No. 1 on the Billboard Adult Contemporary Singles chart in 1977.

The song was also a top 10 hit on the pop and country charts. In 1979, Warnes enjoyed another crossover success with her single I Know a Heartache When I See One.

In 1970 she was introduced to Leonard Cohen, the Canadian singersongwriter who remains a close friend and collaborator to this day. Warnes toured with Cohen in both 1972 and 1979, assuming the roles of background singer, arranger, soloist and duet partner. To date, she has performed on six of his albums. In 1986, Warnes recorded an entire album of Cohen compositions – Famous Blue Raincoat – a richly nuanced recording that is frequently cited as the masterpiece of her career.

Treasured by audiophiles, Raincoat is a platinum seller that celebrates Cohen's artistry while at the same time demonstrating the range and depth of the singer.

Warnes duets with Cohen, sings a capella, rocks with guest soloist Stevie Ray Vaughan. Warnes enlisted Cohen's help with the lyric for her Song of Bernadette, one of her loveliest and most recognizable tunes, especially for this project.

As she matured as an artist, Warnes became an in-demand singer for film soundtracks. She performed three songs that won the Oscar for best song during the 1980s: It Goes Like it Goes, from Norma Rae; the Warnes-Joe Cocker duet Up Where We Belong, from An Officer and a Gentleman; and the Warnes-Bill Medley duet (I've had) The Time of My Life from Dirty Dancing. A fourth song – Randy Newman's One More Hour, from Ragtime –received an Oscar nomination. The duets Up Where We Belong and (I've had) The Time of My Life both went on to be No. 1 singles and won Grammy Awards.

The songs also enhanced Warnes' reputation as one of the most sensitive and selfless vocalists in modern song. Over the years, she has sung on recordings by Harry Belafonte, Jackson Browne, Bob Dylan, Roy Orbison, Sam & Dave, James Taylor, Tina Turner, Bobby Womack, Warren Zevon, and countless others.

Warnes calls The Well, her most recent album, the most honest recording of her career. Inspired by a visit to a natural spring – Jacob's Well – in Central Texas, The Well is both a work of melancholy and hope, rich with natural metaphor. It is clearly the offering of an artist excited by the possibility of music and power of connection through song.