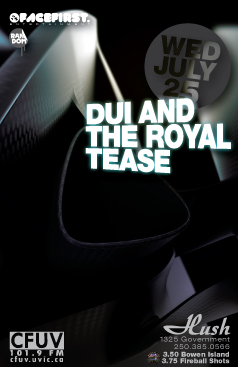 D.U.I. (Djs under the influence)

Sean McCallum 'Triple XL' and Clayton Briffett 'Briffett'.. Hailing from Victoria, BC to bring you one thing: BASS. Spinning the Dirtiest Electro, Filthiest Dub-step/Drum-step and everything else in between.

Guaranteed to keep you out of your seat and have your feet moving all night, DUI is ready to bring the noise to Victoria.

Out of Duncan B.C. Evan and Justin started to DJ 4 years ago by screwing around with some old turn tables, they got their own and quickly started to learn by themselfs aswell as teach each other along the way.

After a while they started to play house parties, bush parties and raves. They started with playing electro house influenced by artists such as Justice, Daft Punk, MSTRKRFT, and many more. After a while they turned to the dark side and fell in love with dubstep. After a year or so of playing dubstep/fidget The Royal-Tease then went their separate ways.

Now a year later The Royal-Tease are back in action with a new style of banging electro and dubstep and are ready to tear the roof off anything in their path. These two guys are so energetic behind the decks they'll have you dripping in sweat and wanting more!