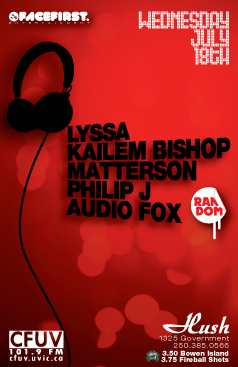 Your talent for the evening:

Lyssa has had the privilege of performing at summer festivals like Shambhala Music Festival, Victoria Electronic Music Festival, Entheos, Uprising, and Solaris. She made Victoria her home in spring 2007, and you can catch her performing at some of the city's coolest lounges & underground hotspots like Hush, The Sunset Room, Whitebird & Base Lounge.

started his DJ Career over 10 years ago in the Vancouver Nightclub scene, holding residencies at many of the top clubs in Vancouver as well as many after-hours venues and events. Playing everywhere from underground parties, to live radio and television, Kailem has adopted his own pliable style and is one of the most flexible House music DJ’s around. Playing an infusion of everything from House, Progressive, Vocal, Electro, Techno, and Tribal makes Kailem very versatile, Tailoring his Energetic Sets to his Audiences and Clubs. His style has graced countless dance floors and wowed thousands of club goers. With guest spots in other major urban centers, Kailem has carved out a niche for himself in the Western half of North America as a DJ of choice for any club event big or small.

After being inspired by the countless local events featuring local and international DJ's, Matterson decided to take up the craft himself. Starting with the electro craze of the late '00 era, he first played parties for Sonica Late Nights and Westcoast Funktions where he learned much about the craft. As time moved forward, he started contributing to regional burning man events, growing into a more mature house sound in the process. Reaching into Funky, Jackin and Tech areas of House showcases his ever increasing development.

King in the kitchen.

Animal in the bedroom.

Gangster in the dj booth.

Although I’m relatively new to DJ’g, I’ve been passionate about electronic music for about 13 years. I recently decided to take the leap from listening and appreciating music to playing which has been an incredibly rewarding decision. My passion for house and deep house music has amplified and I’m excited to be able to express my musical voice through a set. I’ve played several venues in Victoria and a festival near Shawnigan Lake but am really excited to play much more in the near future.

Brought to you by Face First Entertainment.