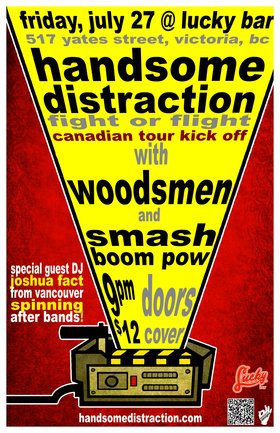 Music: Electronic / DJ, Pop / Rock / Indie
Handsome Distraction kick off their "Fight or Flight" Canadian tour with a party not to be missed!

Lucky Bar welcomes Handsome Distraction and their acclaimed energetic, entertaining, two-step dancing live rock show with Woodsmen, a band that could turn the mood at a funeral, and Smash Boom Pow, a two member band with the the power of four!

SPECIAL GUEST DJ Joshua Fact from Vancouver is coming to keep the dance floor moving after the bands!

other sites: handsomedistraction | myspace
Handsome Distraction, a four-piece rock band from Victoria (BC), has taken a steady approach toward breaking into the rock music scene since the formation of the band in 2009. Doing what so many bands attempt, Handsome Distraction have an original and refreshing sound with an authentic and energetic stage performance to coincide. Devin Perfect s... more info
Audio: Intervention, Animal, Knee Deep

Woodsmen is a young 6-piece Victoria-based alternative rock band who's members have come together from Vancouver, Saskatchewan, Shawnigan, and Hawaii. After forming in September 2011, the band has steadily been picking up speed. Since ringing in the new year, they've already been interviewed on CFUV, as well as featured in the Victoria lifestyl... more info
Submit info on this show to our admins