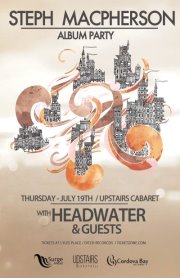 “This gifted Victoria native has been on the bubble for a few years now; in the eyes of many, it's only a matter of time until she breaks.” Mike Devlin, Times Colonist, Victoria - June 7, 2011

Steph Macpherson's infectious, harmony-saturated folk/pop style is like a splice of Stevie Nicks, Sarah Harmer and Jeff Tweedy rolled into one musical entity, topped off with a sprinkling of Feist's charm. Her debut folk-pop EP, “To You”, showcases an ear for melody and a knack for honest words and powerful lyricism that are dominated by acoustic guitars and rich harmonies.

Steph has toured BC & Alberta numerous times over the past few years, with several performances in and around Ontario and Quebec. More recent shows include opening for Hannah Georgas, Jon and Roy, and Michael Bernard Fitzgerald. In June 2011 Steph toured for 3 weeks wrapping up with performances on the Main Stage of both Tall Tree Festival and the Legislature Lawns in Victoria for Canada Day. Her 2011 single, “Summer Salute”, made Steph one of Vancouver’s Shore 104.3FM Song Search Top 10 contestants and has been recognized by FACTOR (Foundation Assisting Canadian Talent On Recordings), receiving funding in support of the recording.

Since releasing her EP, “To You”, in November 2009, Steph added opening for Sarah McLachlan, Sheryl Crow, Sugarland, Colbie Caillat, Erykah Badu, Tom Cochrane, Colin James, and Men Without Hats to her repertoire of performances that already included the likes of Jesse Winchester, Leeroy Stagger, Greg Macpherson, Yukon Blonde, Aidan Knight, and Vince Vaccaro. “To You” has been supported by and is in rotation on CBC Radio One and CBC Radio 3, as well as commercial and college radio stations across Canada.

“The back-porch violin is good and the acoustic guitar pleasant enough, but what makes "Keeping Time" a gorgeous slice of country-folk is Steph Macpherson’s voice. Move over, Be Good Tanyas—there’s a new gun in town.” - Georgia Straight

http://www.headwater.ca/
Hearing Headwater is like listening to the West Coast of Canada in song. Freewheeling, fierce, sentimental and sexy, the Vancouver, B.C., quartet has earned its reputation as one of the finest acoustic roots groups around the old-fashioned way.

Hearing Headwater is like listening to the West Coast of Canada in song. Freewheeling, fierce, sentimental and sexy, the Vancouver, B.C., band has earned its reputation as one of the finest acoustic roots groups around the old-fashioned way – they work their asses off. Formed in 2003 by childhood friends Jonas Shandel (vocals/guitar/banjo) and... more info
Submit info on this show to our admins