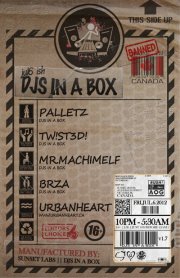 Summer arrives and our new DJs in a Box series returns for yet another joyride of electro, dubstep, glitch-hop, breaks, and booty shakes! Come down for a night packed with talent, as DJs IN A BOX continues to explode onto the nightlife circuit, with their wheels spinning fast. You won't want to have missed this one. Resist the urge to stay home and you will be thanking us! This round, featuring!:


PALLETZ :: Just Party, DJs In A Box, Fevah (NZ) | Victoria
[Dubstep/Electro/Dnb/Ghettofunk] http://www.facebook.com/djpalletz | http://www.soundcloud.com/djpalletz
Palletz (DJs In A Box-Zone PHactor-Victoria Dubstep) has been hittin the bass scene with with serious noise since late 2010. Starting out with none other than Dubstep, he's rounded his sound into a mash of Dub, Dnb, Electro & even Funk into his bass heavy show. Combing forces with his partner in BassCrimes (MrMacHimself), They form "The GoodfellaZ", who have been taking the west coast by storm rocking crowds everywhere they go! It wasn't long before Palletz found himself rocking the airwaves on New Zealand Radio (fevah fm), playing with names like Mark Instinct, Stylust & Emotionz, Yan Zombie, Soulfix, Bass Invaderz & Hirshee to name a few. Taking place in festivals including "JumpShip" & "Sound Clash Of The Titans 2011"With his high volume of multiple genres, you never really know just what he is about to bring out. One thing you do know is that no matter what he pulls out next you know that it will be bass heavy! That being said, Be ready for anything when this guy takes over!

DJ TW!ST3D :: DJS In A Box | Victoria http://www.soundcloud.com/dj-mindphuk http://www.mixcrate.com/DJTWIST3D | http://www.facebook.com/TW11ST3D
Started mixing in 2009 he has picked up fast and loves blowing the mind of his audience with his ever growing arsenal of bangers! No matter what genre is called for he will make the room bounce! David joined up with the crew DJs In A Box in March of 2011 And has been lovin it ever since! David has also been producing since 2010 and posts his tracks up on his Soundcloud (listed below) Producing his own sound of psychedelic electro. He has also started throwing partys in 2011 with his party RAVEITUP and hopefully will be throwing them for years to come!

MrMACHIMSELF :: DJs in a Box, JJP | Victoria
[Electro/Breaks/Fidget] http://www.soundcloud.com/MrMacHimself | http://www.facebook.com/DJMrMacHimself
MrMacHimself aka Sean MacMillan. Hailing from the BassCoast of Canada, Victoria BC, MrMacHimself has been making some serious noise in the club scene since later 2010. Starting with the party rockin' sounds of Breaks, his style has evolved into an pumpin Mashup of Breaks and ElectroHouse. As a resident of HUSH night club (Victoria, BC) with his Partner in BassCrimes (DJ Palletz) they formed a DUO, TheGoodfellaz, who have been tearing up speaker systems all over the west coast. MrMacHimself has had the chance to share the stage with some notable names such as Mark Instinct, Stylust Beats, Kill the Noise, Neon Steve, Generic, Soulfix, Skian and J.A.DJ just to name a few. The rave scene has been good to MrMacHimself, landing slots at many Mini festivals on Vancouver Island and the Greater Vancouver Area. You will have many chances to catch this kid in action in the near future, because he only gets better with time

BRzA :: DJs In A Box | Victoria
(complextro, moombahcore, mechadub)
In little under 6 months, the 22 Year old BRzA (Pronunciation: Brizz-Ah), has grown quickly into one of Victoria's Premiere DJ's. In this short time, he has played in the Capital Cities most popular nightclubs, held down duel House DJ residencies (West Coast Taphouse/Temple), been signed to Just Party Productions (Calgary/Victoria), thrown down MASSIVE Sets at Raves, Festivals, and Private Parties, and become the "Charity Chicks" Official DJ. As well, BRzA has been nominated for the 2012 VNLA's Best New DJ. He is known for his unorthodox methods of flipping tracks, the diversity of music in his DJ sets, his signature/ridiculous tempo changes, and his ability to keep people dancing.