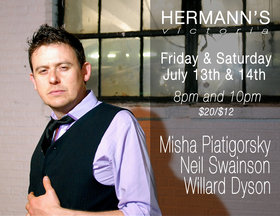 Music: Jazz / Blues
Hailed by the Boston Globe as an artist who beautifully merges the worlds of serious jazz and pop, Misha Piatigorsky’s blend of powerful melodies with an unusual harmonic sensitivity gives his sound a deeply personal yet cosmopolitan dimension, reflecting his experience as a Russian-Jewish émigré growing up in urban America. Piatigorsky made his public debut at age 5 on Russian National Television, and has since been a highly sought-after pianist, regularly performing at prestigious venues ranging from Lincoln Center, the Kennedy Center, and the Yekaterinburg Philharmonic to the Cotton Club in Tokyo, Iridium in New York City and the Basin Street in São Paulo. He has toured extensively across Europe, North and South America, Australia and Japan, performing at venues such as the Victoria Jazz Festival, the Montreux Jazz Festival, the North Sea Jazz Festival, the Perugia Jazz Festival, Perth International Music Festival, to name a few. In addition to winning the Thelonious Monk Composers Competition (2004), distinctions have come from the American Pianists Association (1996), Rutgers University (1991-1995), the Manhattan School of Music (1995-1997), and the John Lennon Songwriter’s Competition (2000). He can also be heard on the soundtracks of major motion pictures including Chaos Theory, Pretty Persuasion, Victory Over Darkness, RX, and Danika. Renowned for his virtuosic flair onstage, Piatigorsky’s technique, charisma and electric energy have been described in the Jazz Review as combining - the chalice of modernism with the stew-pot of soul - , - straddling the line between Mussorgsky and Vince Guaraldi, - according to Brad Wasleth of Chicago Jazznet. Born in Moscow, Piatigorsky immigrated to the United States at the age of eight. He earned his Bachelors Degree under pianist Kenny Barron at Rutgers University, and his Masters Degree at Manhattan School of Music.