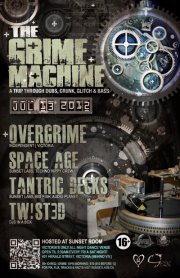 Ready for more from THE GRIME MACHINE?! In 2012 we carry forward to grimey tradition of this ever-awesome monthly series as we take you on an unpredictable and dark timewarp through bass music - dubstep, glitchhop, dnb, ragga, tech-hop, garage, crunk and all forms of the whomp & wobble! This super sexy low frequency dance infusion will have you a grimey sweaty puddle on the floor when it's through with you. Once you've entered the Grime Machine, there's no telling where we'll end up!! STARRING! (in order of appearance):


OVERGRIME! :: http://soundcloud.com/morgan-overgrime
Overgrime (aka Morgan Prevost), born and raised in Sooke BC, has been performing and playing music since he was nine years old. He first discovered electronic music in the summer of 2008 while partying in his friends basement. he spent the next two years researching the heaviest/bassiest grenres from around the world. Morgan became OVERGRIME! in the summer of 2010 wen he started playing house partys along side fellow sooke DJ's like Stay_White? & C-Bot. He has spent the past year and a half destroying partys with the heaviest tracks and genres like, Hard Electro, Electro House, Dubstep, and Drum & Bass.

SPACE AGE :: Sunset Labs, Astral Harvest, Techno Hippy Crew | Victoria
http://space-age.ca/ | http://astralharvest.com/ | http://smokeybandits.ca/
Space Age, originally from Edmonton, AB grew up with a love and appreciation for all types of music and genres. Transforming this love to DJing, he developed a eclectic style fusing sexy, ethnic, and soulful sounds together combined with technical mixing. His diverse sets range from sultry bellydance and downtempo chill, to dancefloor shaking dubstep and elegant psytrance. With a little something for everyone, Space Age will always get the dancefloor moving. A pioneering member of the Techno Hippy Crew, Astral Harvest, and Vibe Tribe's official bellydance DJ, Space Age has played at some of Edmonton and Calgary's biggest shows including: Beats Antique, Dehli 2 Dublin, Bassnectar, Skream, Freq Nasty, Rusko, Caspa, Glitch Mob, Freestylers, Kush Aurora, Juakali and David Starfire. One half of the Smokey Bandits, 2010 saw headlining sets at Motion Notion, North Country Fair and Astral Harvest including an incredible glitch-hop beatbox freestyle set with the amazing Shamik.

TANTRIC DECKS :: Sunset Labs, Big Fish, Audio Planet | Edmonton, Victoria
http://soundcloud.com/tantric-decks
Tantric Decks has been ravishing dance floors with energy, passion, and party rocking basslines for nine years. He has performed at countless club nights, residencies, parties and music festivals. He has also been on the production crew for all night parties and music festivals, too many to name. He has released over 30 original tracks and remixes (under his two alias') on record labels from Canada, USA, Sweden, Romania, and UK. His tracks have received praise and support from superstars such as Far Too Loud, Lazy Rich, Reid Speed, Bassnectar, Subvert, Knight Riderz, Samples, Soulfix/Dirty Politics, Jay Cunning, and Yuhei Kubo. His remix of Bittersweet Symphony was even used in an Indie Film in a film festival in San Francisco. Tantric Decks' hard hitting drums, thrashing basslines, and clever edits will keep him a household name for years to come!

DJ TW!ST3D :: DJS In A Box http://www.soundcloud.com/dj-mindphuk http://www.mixcrate.com/DJTWIST3D | http://www.facebook.com/TW11ST3D
Started mixing in 2009 he has picked up fast and loves blowing the mind of his audience with his ever growing arsenal of bangers! No matter what genre is called for he will make the room bounce! David joined up with the crew DJs In A Box in March of 2011 And has been lovin it ever since! David has also been producing since 2010 and posts his tracks up on his Soundcloud (listed below) Producing his own sound of psychedelic electro. He has also started throwing partys in 2011 with his party RAVEITUP and hopefully will be throwing them for years to come!


also ft URBANHEART LIVE ::.
Urbanheart Live has been created to support a community of local artists in live visual arts performance. Artists create live artworks of vision and creative energy, while being inspired by music and the awesome vibe of the space. Original paintings, collages and drawings will be on sale at each event.. be prepared to be blown away! Prints of the artists' work, videos and bios can be viewed at http://www.urbanheart.ca/ now!