n an effort to support art in all its mediums, the Victoria BC Ska Society proud...

n an effort to support art in all its mediums, the Victoria BC Ska Society proudly presents the 3rd infusion of the Rocksteady Collective Multimedia Art Exhibit.

The theme for this year’s exhibition is “2Tone.” 2Tone Ska was a racial unity movement, bringing together pe...ople from all walks of life on the dance floor and on the stage, in the midst of massive racial discrimination. After the immigration policy was changed in the ‘60s, a large number of Jamaicans immigrated to Britain, and brought with them heavy ska and reggae musical influences. 2Tone was born in England in the late ‘70s. The second wave of ska music, “was basically about black and white people playing together” (Pauline Black of The Selecter). 2Tone ska bands addressed political and social issues with their lyrics, promoted common sense, moderation and equality. The legacy of 2Tone is still apparent in modern ska, using music as medium to educate people and open minds.

This year’s exhibit will feature 2Tone inspired art by some of our most passionate skartists.

All programming is by donation (or suggested donation) with proceeds going to the Alpha Project.
Check out http://www.victoriaskafest.ca/alpha for more info on this initiative.

Original art pieces, art prints and merch will be on sale!

pop/rock/reggae from Victoria BC
Unknown

pop/rock/reggae from Victoria BC
Unknown 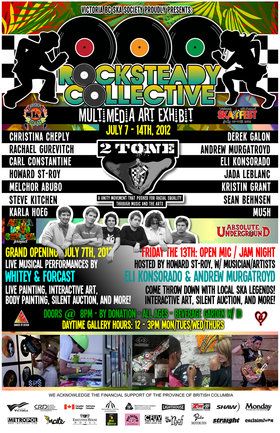