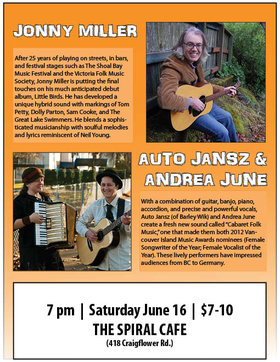 Auto Jansz' songs and style have turned many heads in the Canadian roots community. As a member of the popular roots band, Barley Wik, she won Album of the Year at the 2004 Vancouver Island Music Awards, and since then, Auto has come into her own with solo recordings and performances that are making Canadian roots fans sit up and listen.


Andrea June graduated from the Canadian College of the Performing Arts and briefly attended McGill University’s opera program. Since then, she has explored the vocal territory of jazz and pop. As a songwriter, she weaves influences from Beethoven to Bartok with the comforting familiarity of roots music to create a sound that is both soothing and unexpected. In 2010, her song, “The Tide,” was shortlisted for the Island Singer-Songwriter contest.


Together, they create an energized sound, playing to audiences from Music on the Mountain Festival to Victoria Folk Music Society.


After 25 years of playing on streets, in bars, and festival stages such as The Shoal Bay Music Festival and the Victoria Folk Music Society, Jonny Miller is putting the final touches on his much anticipated debut album, Little Birds. Drawing on a wide range influences, he has developed a unique hybrid animal with markings of Tom Petty, Dolly Parton, Sam Cooke, and The Great Lake Swimmers. He blends a sophisticated musicianship with soulful melodies and lyrics reminiscent of Neil Young.


For more information, or to schedule an interview, email [email protected]

Andrea June is "a wonderful singer and a talented multi-instrumentalist who brings fire to the stage." - Jennifer Louise Taylor, Musician 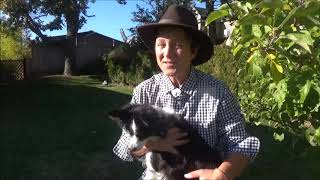