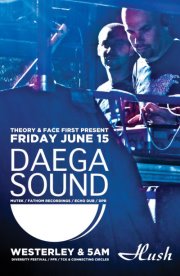 Producing all forms of electronic, bass and dance music but mostly known for their deep, heavy and intricate dubstep tunes, Daega Sound also perform as a Live PA duo and DJ duo. Laying a steady foundation with performances at Stalwart Canadian festivals such as Mutek, New Forms Festival, Shambhala and Bass Coast they have gone on to perform internationally all the way to Dubloaded, Pinch's cutting edge bass music monthly in Bristol, UK. As well as heading up their own newly minted record label Fathom Recordings Daega has digital releases on UK Garage and 2-Step legend Noodles (Groove Chronicles) label DPR, DFRNT's Echo Dub, Mutek Comp 2011, San Francisco's bass-centric Blipswitch and Noah Pred's techno/ bass music label Thoughtless recordings. Also two 12" releases on out their own label Fathom Recordings
and Texas based label Formant Recordings. 2012 so far has releases slotted for Drum and Bass ambassador Loxy's CX: Digital, DPR, CarCrashSet, Fathom, Crude Records and a remix of Mat the Alien for his label, REALLY GOOD. Sean-Michael Yoder from IBIZA VOICE offers this insight on Daega Sound - "There is a sense of depth and originality to be found without a sacrifice in the off-kilter rhythms and brute force that comprise the best the new form has to offer."

Coming from Lasqueti Island on the West Coast of Canada, Westerley (also known as Wes or West Wes) produces and plays his own blend of bass heavy music. With over 10 years of experience Westerley has played countless parties, festivals and club nights alongside a massive list of well known artists such as Pendulum, Dj Fresh, Chase & Status, Bassnectar, Eskmo, Freq Nasty, Liquid Stranger, Gaudi, Shy Fx, Deekline, The Freestylers, Grooverider, SS, Dj Zinc, Twilight Circus Dub Sound System and many many others including opening for Dj Craze & Armanni Reign in Estonia.
After 7 years of playing at and being involved in Diversity Festival on Texada Island he's taken on a major role in making it all happen.
Whether he's playing a deep dubstep set, glitchy mid tempo set, peak time party set or all of the above, you won't want to miss it. One thing for sure is it's going to have a lot of bass…

5am's love for music has been with him since day 1. Growing up around live bands, his interest for electronica has spawned within the last 5 years. Influences like Pink Floyd and Tool quickly transformed into Lighta!, DJG, and Headhunter aka. Addison Groove to name a few. Recently, focusing on the aspects of production, 5am is creating his own sound, merging a unique blend of wonky, funky house and dubstep to make you move in ways you never thought possible. Opening for such international headliners such as Ott and Mimosa, you know this boy isn't just playing around.