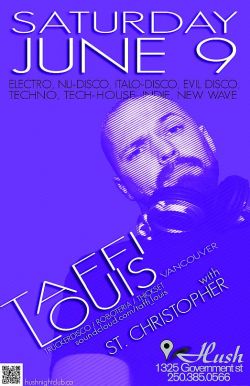 Since October, 2001, Taffi Louis has built a unique reputation in Vancouver's music scene, starting with its gay nightlife. His DJ sets and mixes convey his passion in exploring newer, cutting edge sounds while using familiar and forgotten favourites surprises, not filler.

From his unexpected beginnings as a DJ in a Davie Street bar, he soon landed his first residency, which lasted nearly six years. And just as the electroclash and nu-disco movements were breaking out, they became the backbone of even his earliest DJ sets, providing listeners who'd never consider themselves "club people", something fresh, with a distinct edge, yet tapped into nostalgic new wave and classic disco sensibilities - "the best of both worlds", as it were.

Taffi would soon find new followings, being sought outside the Davie ghetto for events in Gastown and East Van, even making headlining appearances in San Francisco, Seattle, and Toronto - mostly under an assortment of monikers.

Eventually, Taffi would go on to produce a range of his own ongoing events, hailed for their creativity, inclusiveness, innovative design, and for their variety of quality electronic dance music that's engaging without being "played out" already. His approach would set local precedents through such nights as UNCANNY, GRIP, AUDIO TEABAG, THICKSET, ROBOTERIA, and most recently, TRUCKERDISCO.

Always seeking inspiration in the moment, his approach to DJ'ing is as much about the space, the event, and the expectations people bring with them, as it is about seeking out and presenting music that's compelling, and engages through a range of sounds, eras, emotion, ... and motion. There is no "typical" DJ set by Taffi Louis. Each one unfolds and tells its own story.