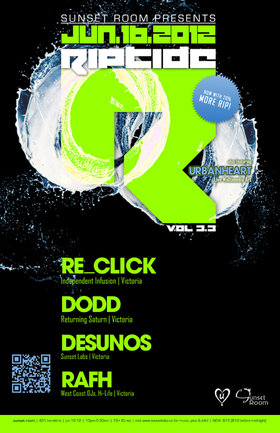 You know that feeling when you're on a beach and your feet get swept out from under you? That's NOTHING next to this experience. Riptide brings some of the hottest DJs that Victoria has to offer, delivering you the freshest and sexiest sounds in dubstep, electro, breaks and progressive house - giving you more than enough flavours to keep things interesting! Come prepared to ride the tide with a group of like-minded 18+ partiers, who are all ready to get down, if they can just keep their feet under them :)

Our artists, in order of appearance:

RE-CLICK :: Independent Infusion | Victoria
http://www.facebook.com/reclick | http://soundcloud.com/re_click
Rhys Closson: Born in Victoria, but ancestry tracing back to Germany and Sweden, it is no wonder that Rhys became an avid electronic connoisseur. Always loving the dark and energetic side of Techno, Tech-House and Minimal he is sure to make you move and fall into a rhythmic state. He has been mixing since 2005. Erik Posnikoff: Also Swedish by blood, his musical style contrasts Rhys's with a smooth blend of Funky Tech-House, House and of course..TECHNO. He doesn't mess around when it comes to 4x4 beats. He's been working on productions of his own recently. He has been mixing seriously for the past few years. We started playing together two years ago, and decided we needed to make a name for ourselves. We love the click in techno on re_Peat so we took our first initials and named ourselves re_Click. We closed Diehard this past summer for 5 hours, and have played many community dances and house parties.

DODD :: Returning Saturn | Victoria http://www.returningsaturn.com/user/dodd | http://www.soundcloud.com/dodd
The existence of Dodd has long been questioned by those who've not been on his dancefloor -- but those who've been there are fast and thorough believers. From his humble beginnings as a dancefloor observer Dodd carefully catalogued the sounds and reactions of the people in order to pinpoint the perfect palette of progressive sounds: blending trance and techno tidbits into memorable dancefloor journeys that transcend sonic expectations. With these dancefloor commandments Dodd has been rocking crowds consistently in Victoria, as well as both stages of the Entheos4 gathering in Summer of '08. Whether you're a believer or not, with the speakers as his chorus, you will be moved by the voice of Dodd...

DESUNOS :: Sunset Labs | Victoria
http://sunsetlabs.ca/desunos/
Throwing down dynamic dance music since the summer of 2006, DJ Desunos (aka Laughlin Meagher) finds his roots in dub, reggae and world ethno electronic music, and now finds his home in electro/progressive house with a dash of breaks and tastefull trance. Through his work as a lead singer/songwriter, dee-jaying has become a natural evolution for this dynamic live performer. With 17 years experience on stage Laughlin knows how to rock an audience and is well known for his harmonica solos, his skill on the melodica and his live MCing & vocals. A skilled multi-instrumentalist and dedicated student of music, you never know what he will bring next to his show. Crossing many genres, Desunos has shared the stage with many local and international acts including Adham Shaikh, David Starfire and Timothy Wisdom. Coming soon to an overjoyed sound system near you!

R.A.F.H. :: West Coast Djs, Hi-Life, WCU | Victoria
http://www.rafh.me/ | http://www.westcoastdjs.ca/rafh
RYAN... ALEXANDER... FREDERICK... HRECHKA...
Better known to most as "R.A.F.H."...he is no stranger to the scene. This 11 year veteran of the decks has been turning heads all over Vancouver Island where he has headlined major clubs and Afterhours spots, while also having the honor to open for such prestigious artists as Chris Lake, Sebastien Leger, Kevin Shiu, Bass Kleph, Adam K, Cosmic Gate, Lazy Rich, Miles Dyson, Dabruck & Klein, Wolfgang Gartner, Sam La More, and Soulfix, to name afew.
Never locking himself down to just one genre, the past decade has seen him play almost every major genre of dance music, from Hard House to Drum n' Bass to his own genre dubbed "Prog-lectro". This experience has resulted in a sharp ear for what works on the dancefloor. Currently, in 2012, he finds himself spinning records with no solid genre, lost somewhere in between the ever changing boundries of techno and house.
RAFH has held down Friday residencies at both The Mex & The Avalanche in Courtenay, during the now legendary Cloud21 clubnights, and in Victoria at both Boutique & Karma. In 2012 you can catch him regularly at Hush, Temple Afterhours, Sunset Room, or via his bi-monthly podcast, on iTunes. His live sets are full of emotion, energetic efx use, and rock solid mixing, always keeping the crowd guessing as the night progresses
2010 saw his first single "A1-BETA" finished, and his first remix of renound Vancouver artist SKLA's track "HWPBC" up on Beatport under his HI-LIFE label in 2011. Now, for 2012 his fresh new techno single "Catalyst" has been rocking dancefloors whenever its dropped. With more releases on the way, RAFH is definitely one to watch!