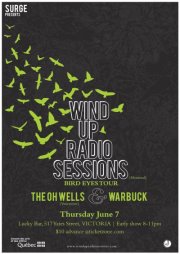 Formed in 2008, Wind Up Radio Sessions merge folk, pop and rock sensibilities. Currently calling Montreal home, members originate from Hamilton Ontario and Scarborough UK. Their debut album ‘Red Brick House’ was released in 2010 and the band found themselves on the receiving end of much critical praise. Continually gigging across Quebec and Ontario, the band is set to release a follow up LP titled 'Bird Eyes' in the spring of 2012. Stay tuned for new material and upcoming shows.

The Oh Wells began with acne, corrective dental wear, and the inability to look the opposite sex in the eye without panicking and/or falling in love. In other words, the Oh Wells began with high school. At sixteen, Sarah Jickling was your average super-shy suburban teen. She spent most of her time baking cupcakes, re-reading the Harry Potter series and quoting Meg Ryan. Then, one day, everything changed. Sarah and one of her super-shy friends decided to start a band.

It happened over the winter break of Grade 11. The girls recorded their very first songs with the help of Garage Band and made themselves a little Myspace page under the name “The Oh Wells”. That’s “oh well” as in: “The boy I wrote these songs about probably thinks I’m gross…oh well!”

Flash forward to one week later. The Oh Wells returned to school and suddenly people who had never talked to them before were stopping them in the hallways. The guy who sat in front of Sarah in math class turned around during a lesson and said “I love your band.” Even “beard guy”, Sarah’s biggest crush ever, had heard the Oh Wells’ tunes. Their lives would never be the same.

During the next few years, The Oh Wells went from playing the school’s Terry Fox run, to White Rock’s coffee shops, to venues where they had seen their own favourite bands play. These years contained some agonizing heartbreaks (see “beard guy”), a couple of equally painful line-up changes, and several boxes of “do-it-yourself” hair dye. But most importantly, these years gave way to a whole slew of catchy indie-pop songs that sound like they had been originally written in a diary. In a good way.

Now the Oh Wells are CITR Shindig winners, EMP Soundoff finalists, and are in the Peak Performance Project top twenty! Sarah is working with ActiveMinds Productions and will be releasing a new single this year and touring in 2012. She is currently a blonde.

Warbuck is a collective of five souls with little more than time to live and heart to give… Let’s Flash back to the summer in the year of Our Lord, twenty-eleven; the group got it’s feet half off the ground with a few songs and a couple humans that would form its heart… However(!) there would be no smooth intro here folks… Skip forward to late-autumn of that same year and after line-up negotiations, identity crises, song drops, name changes, and intense familiarizing within themselves, the group began writing what would come to reflect a most personal incarnation of Regional Mexican Folk Balladry. The collective end the year of their naissance under the name “Tio Borracho,” fail to hold up their end of a Latin-American showcase and momentarily disband after what can only be described as an intensely human Cowichan Lake sit in. After a short hiatus, the kids emerge in twenty twelve with a new set and style, poised to make their mark. Warbuck's’ sound hovers between alt. rock reminiscent of 1996 with an inclination towards soul and pop and rarely strays far from the emotionally charged. Stay tuned for dates, recordings and erotic tweets from your favorite Mariachi turned Indie darlings… At the very least you are liable to wind up with some naked Polaroids of the drummer on your hard drive. Namaste

other sites: tumblr
Warbuck was a band that based out of Victoria, BC. more info
Audio: We Can't Be Touched, Lakehouse
Submit info on this show to our admins