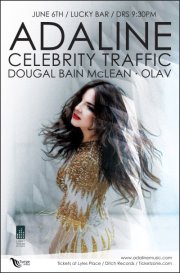 Talk about starting with a bang. Adaline achieves near Judy Garland levels of melodrama on “That’s What You Do Best”, the stately electro-torch song that opens her new album, Modern Romantics. But she doesn’t get there without boxing your ears with wiggy sax (from Shuffle Demon Richard Underhill) and unhinged guitar solos (by Hawksley Workman) on the way. It’s what Adaline does best; elegant structures that happen to be wildly hooky. “It’s a pop record,” she says of her sophomore effort, “but certainly not straight down the middle. I have pop sensibilities, but I hope I come across as a little deeper than a pop tart.” Deeper by orders of magnitude, based on the sheer stylistic scope of Modern Romantics, and the quixotic path it takes through sexy, minatory trip hop (“Keep Me High”), smartly built robo-pop (“The Noise”, “Sparks”, “Stereo”), and even the sad-erotic cabaret of “Cost Is Too High (Not To Love)”. Recorded at Toronto's Canterbury Studios, Adaline and her collaborators and co-producers Hawksley Workman, Marten Tromm, and Tino Zolfo have made the kind of record that's invested with depth you only ever get from high-end, ultra-talented music nerds.

SInce its release on Light Organ/Universal Records on November 1st, 2011 the album has received strong praise from music critics. The Grid TO calls it "hook-y without being soulless, and patchwork in the most flattering sense. Think of this as pop, unpackaged". The Uniter states, "A strong sophomore release from a crucial new voice" and CBC Radio 3 deems the album "A visionary classic from one of Vancouver's best up and coming talents. A breathtaking in-depth journey of the imagination".

Modern Romantics entered the "Earshot" Top 50 on Nov. 29th 2011 charting in the top 10 in many stations across Canada and her song "That's What You Do Best" had an impressive 12 week stay in the Top 30 on the CBC Radio 3. The music video for the first single "The Noise" was premiered on Andy Warhol's Interview Magazine Online in January 2012. The video broke into the Top 20 on Much More Music and garnered over 100,000 Youtube views in its first week.
The television and movie world also took note of the album. Shortly after its release, the song "Say Goodbye (I Won't Even)" was featured on the "Grey's Anatomy" mid-season finale (Nov. 2011). A couple weeks later, Adaline's song "Sparks" was again featured on "Grey's Anatomy" with almost back-to-back episode placements. Other music features include "90210", "Ringer", "Royal Pains", "Rookie Blue", "Degrassi", "The Listener", "Bomb Girls", "Heartland" and the new Samuel L Jackson movie "The Samaritan".
Since her debut release Famous For Fire (2008), Adaline has been interviewed on ETalk, MuchMusic, ET Canada and has toured across Canada sharing the stage with esteemed colleagues Blonde Redhead, Wild Nothing, Dan Mangan, Ryan Guldemond (Mother Mother), Hannah Georgas and The Sheepdogs. She has played numerous festivals including CMW, NXNE, Junofest and the Western Canadian Music Awards. Adaline embarks on a Western Canadian tour this May, 2012, and will be joining the CBC Radio 3/Green Couch "Tracks On Tracks" music train on its trek across Western Canada to Toronto in June.

Celebrity Traffic:
http://www.celebritytraffic.ca/
We make music with jackhammers and duct-tape.

A powerful force in a genre of music seldom performed by women, adaline draws in her audience with solid musicianship, authentic passion, sensuality, and crafted songwriting. She creates an electronic pop rock encounter with her sweeping piano sounds, soaring vocals, haunting melodies, and captivating stage presence. Her music has often been compar... more info