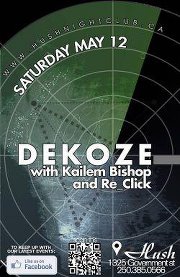 (a.k.a. Michael Babb) was born in England, but raised in Canada, and launched his career in Saskatoon, Saskatchewan. In 1991, he took up his first DJ residency at "Numbers" (later renamed “Divas"). He went on to co-create / co-own a highly regarded nightclub / production company called “Plastic Puppet Motive” (PPM). Having establishing himself as western Canada's most successful DJ, Deko-ze relocated to Toronto, Ontario in late 1997. Long a leading force in the local scene, both NOW Magazine and Toronto DJ Festival have named him “Best Electronic DJ”. He has been labeled "Canada's Hardest Working DJ"; frequently playing gigs in nearly every Canadian centre — big and small! Building his international profile, Deko-ze has numerous gigs in the USA, UK, Germany, Taiwan and Mexico under his belt. Deko-ze was signed to a multi-year Artist / Producer Development deal with Hi-Bias Records in 2006. Deko-ze Regards Electronic Music as an Art-Form; a natural extension of his classical training in piano. He believes music should induce a wide range of emotional response, but ultimately programs to create energy and positivity. In a scene now overly segmented, Deko-ze is increasingly distinctive: although categorized as a House DJ, he is recognized for his ability to fuse music of multiple genres (Deep, Funky, and Hard House; Tribal; Progressive; Electro; Tech-Trance; Techno). Deko-ze has an energetic and charismatic stage presence; engaging personality, strong technical skills, and original approach to programming have uniquely cultivated a huge following in throughout the House Scene.

Kailem started his DJ Career over 10 years ago in the Vancouver Nightclub scene, holding residencies at many of the top clubs in Vancouver as well as many after-hours venues and events. Playing everywhere from underground parties, to live radio and television, Kailem has adopted his own pliable style and is one of the most flexible House music DJ’s around. Playing an infusion of everything from House, Progressive, Vocal, Electro, Techno, and Tribal makes Kailem very versatile, Tailoring his Energetic Sets to his Audiences and Clubs. His style has graced countless dance floors and wowed thousands of club goers. With guest spots in other major urban centers, Kailem has carved out a niche for himself in the Western half of North America as a DJ of choice for any club event big or small.

Rhys Closson dreams of music all day all night. He's been into electronic music since grade 5. It started off with influences such as James Holden and Sasha. He used to spin dark dnb for a time period when he started mixing in 2005, but has mellowed out slightly. Today you will see him rocking energy driven techno, deep tech house, and smashing the hottest minimal tracks. He's a bit miffed about the lack of this sound being played out in victoria, and wants to change that, one show at a time. Expect to hear the sound of the underground. He plans to move to Europe and get into the thriving scene in berlin or amsterdam. Festivals that he is dying to attend are Awakenings and Time Warp. In his record bag you will find bombs from labels such as Drumcode, Minus, and Mobilee to give you a taste. Rhys is also a graphic design graduate, which helps with marketing for the re_Click team.

Erik Posnikoff started listening to tech and prog at 19 and was hooked. Soon after he got into DJing, and learned the basics, but took a different road to explore other interests then came back at it a while later with Rhys. Names that played a big role in his desire for music are: Sasha, John Digweed, and Nick Warren to name a few. Often you may see Erik playing melodic bass driven tech house, thick chunky techno, and off the wall minimal bangers. He's a great fit with Rhys in terms of sound, energy, and pushing Rhys into the studio. Erik loves production and has been hard at work honing his skills.

re_Click started from Erik and Rhys meeting regularly to mix and showcase new tracks they found for each other. After countless hours mixing at Rhys's and a couple of house parties, they had achieved a chemistry that needed to be shared with the dance floor. A lucky break caught them their first gig at Diehard 7, which sprouted into many more gigs at The Sunset Room, Sonica, Base Lounge, Adventure Island, and Diehard 8. 2012 has already seen the release of re_Click's first collaborative track with R.A.F.H. - Catalyst, which has got a great response, and is currently being remixed. re_Click hopes to find a record label to sign this to. A future of music is destined for this friendly duo.