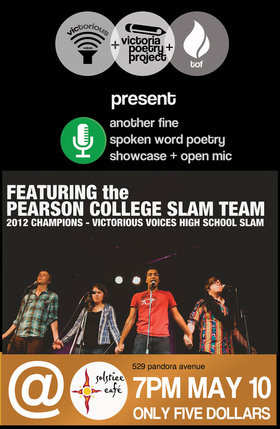 Music: Open Mic / Jam / Karaoke
Tongues of Fire presents the Victorious Voices after party featuring the bright young talents of The Pearson College Slam Team. They rocked Vic Voices in their first year of competition and ended up taking the title.

The Pearson Slam Team is Gautham Krishnaraj (T-Dot, Ontario), Lucas Olscamp (The far isle of Potatoes, P.E.I.), Amber O'Reilly (N.W. Territories), Dylan Felt 'himself' (New Mexico), and Galen 'what the' Hecht (New Mexico). We are all students at Pearson College in Metchosin, an international school that is a division of the United World Colleges. The team we put together for Victorious Voices was the first poetry team that has ever represented Pearson in a slam, and we were very fortunate to have had the opportunity to do so. We came to Victorious Voices and were inspired by the energy and brilliance of the wonderful poets there. We might have paid off the judges in our favor, and now we are fortunate enough to be representing once again at Tongues of Fire.

Come out and get a taste or a reminder of how awesome Vic Voices was this year.