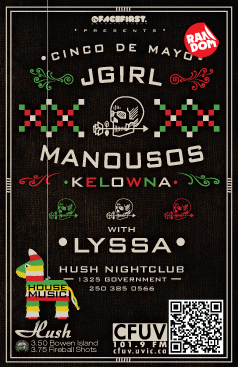 Music: Electronic / DJ
It's CINCO DE MAYO!!! We'll be decorating like crazy for this show so dress appropriately!

Come down early for reduced cover and a chance to win a $25 bar tab!

Jenn is part anglo, part Quebecois, & part hippy at heart. She secretly dreamed of being a Cirque Du Soleil acrobat growing up in the suburbs of Montreal. Manousos' interest in Punk and Electronic Dance Music began while living in Greece during his teen years where he DJed at sunny poolside patios in the tourist district of Athens. Jenn & Manousos met in Montreal in 1997 while studying at University in Downtown Montreal, a city that never sleeps and honestly never let go of Disco. They spent many years chasing late nights in Eastern Canadian nightclubs, jazz festivals, lounges, & raves. This provided the foundation for their love for House, Jazz, funk, smiles, dancing, mirrors balls, & heavy bass.

In 2004 they gave up their city lives for the fresh air and beautiful scenery of BC. Since their move westward, they have appeared regularly all over BC at notable West-Coast nightclubs & festivals. 'Relaxed House’ has been used to describe their sound being Jazz-filled Deep House meshed with Minimal & percussive Techno and the Deeper / UK Funky side of Dubstep. They have a passion to find the rarest, funkiest, oddly eclectic, timeless, & most electrifying 'four four' tracks which keeps their fans grooving for hours.

Their current project Footwerk Events (footwerk.ca) keeps the local nightclub scene hot with intimate events at Oasis nightclub and large scale productions at Sapphire Nightclub. Footwerk has played host to many amazing acts in the past two years including a full spectrum of underground sounds from House to Hip Hop and Drum & Bass to Glitch Hop with guests like Mark Farina, Nu-Mark (Of Jurassic 5), Aphrodite, Mat The Alien, Mimosa, Netsky, Rico Tubbs, Elite Force, and tons more.

Jenn & Manousos are busy people in the underground entertainment industry having their paws in many different cookies jars. Yes, they are married. Yes, they have day jobs too. Yes, Manousos is his real name.


Lyssa has had the privilege of performing at summer festivals like Shambhala Music Festival, Victoria Electronic Music Festival, Entheos, Uprising, and Solaris. She made Victoria her home in spring 2007, and you can catch her performing at some of the city's coolest lounges & underground hotspots like Hush, The Sunset Room, Whitebird & Base Lounge.


Brought to you by Face First Entertainment!