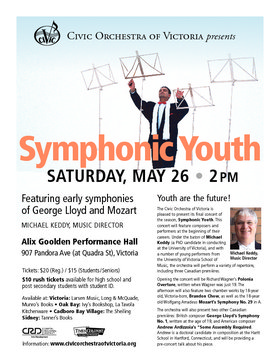 Youth are the future! The Civic Orchestra of Victoria is
pleased to present its final concert of the season, Symphonic Youth. This concert will feature composers and performers at the beginning of their careers. Under the baton of Michael Keddy (a PhD candidate in conducting at the University of Victoria), and with
a number of young performers from the University of Victoria School of Music, the orchestra will perform a variety of repertoire, including three Canadian premières. Opening the concert will be Richard Wagner’s Polonia Overture, written when Wagner was just 19. The afternoon will also feature two chamber works by 18-year old, Victoria-born, Brandon Chow, as well as the 18-year old Wolfgang Amadeus Mozart’s Symphony No. 29 in A. The orchestra will also present two other Canadian premières: British composer George Lloyd’s Symphony No. 1, written at the age of 19, and American composer Andrew Ardizzoia’s *Some Assembly Required. Andrew is a doctoral candidate in composition at the Hartt School in Hartford, Connecticut, and will be providing a pre-concert talk about his piece.

The Civic Orchestra of Victoria

Inaugurated in 1983, the Civic Orchestra of Victoria is a not-for-profit, volunteer organization dedicated to providing an opportunity for musicians of varying ages and abilities to perform a wide repertoire of orchestral music for supportive audiences in the Victoria and region. The orchestra serves as a platform for aspiring soloists and for chor... more info
Videos: 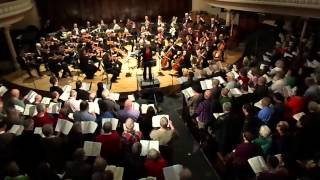