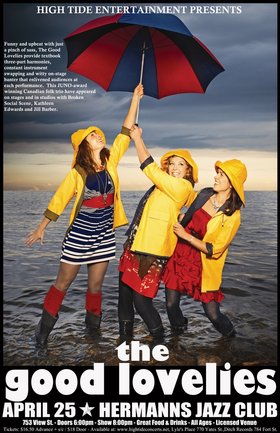 Event Archive - Harmonies and rhythms by 3 Goddesses who will make you melt: The Good Lovelies

Sunny and upbeat, with just a pinch of sass, the Good Lovelies textbook three-part harmonies, constant instrument swapping and witty on-stage banter have enlivened the folk music landscape since they joined forces in 2006 for their first show at Toronto’s funky Gladstone Hotel.

How the Good Lovelies (Caroline Brooks, Kerri Ough and Sue Passmore) got together is a bit of a mystery: Sue remembers meeting her band mates during a limbo competition, Caroline thinks they met at a chess tournament, but Kerri is convinced they first crossed paths during a bar fight. Whatever the story may be, the ladies immediately realized they had something special, so they hit the road on a mission to charm Canadian audiences coast to coast.

Their tireless rain or shine outlook and undeniable mutual respect have helped the trio weather years of constant touring. With jaunts to Australia, the UK and the US in their 2011 schedule, the Good Lovelies road-tested tenacity will bring them further afield than ever before.

Light-hearted songwriting and irresistibly buoyant dispositions have made them the darlings of the summer festival circuit, including spots at the storied Mariposa and Hillside Festivals and the Montreal Jazz Festival. They have toured with Stuart McLean and the Vinyl Café and appeared on stages and in studios with Broken Social Scene, Kathleen Edwards and Jill Barber.

In addition to their acclaimed holiday album, Under the Mistletoe (2009), which showcases old and new seasonal tunes (including three original songs), the Good Lovelies self-titled full-length album (also released in 2009) proved their blithe brand of folk music has year-round appeal. With this record, the Good Lovelies won New Emerging Artist at the Canadian Folk Music Awards. In 2010, this same album received a Juno for Roots/Traditional Album of the Year.

Let the Rain Fall, their third full-length album, is an ode to camaraderie. With equal parts city and country, highway and home, wistfulness and sass, the Good Lovelies good humour and self-assurance shines through from the toe-tapping start of "Made for Rain" to the sweet final notes in the French-flecked "Mrs. T." In between, you’ll hear reflections on urban imperfections with "Backyard," straight-up love songs like "Best I Know" and upbeat numbers like "Kiss Me in the Kitchen."

The album, like the Good Lovelies, has a universal appeal, sure to please not just their fellow Canadians, but those south of the border and across the pond too.

Let The Rain Fall, say the Good Lovelies, confident that bright and breezy days lie ahead

The Good Lovelies website: http://www.goodlovelies.com/ Sunny and upbeat, with just a pinch of sass, the Good Lovelies textbook three-part harmonies, constant instrument swapping and witty on-stage banter have enlivened the folk music landscape since they joined forces in 2006 for their first show at Toronto’s funky Gladstone Hotel. How the... more info
Submit info on this show to our admins