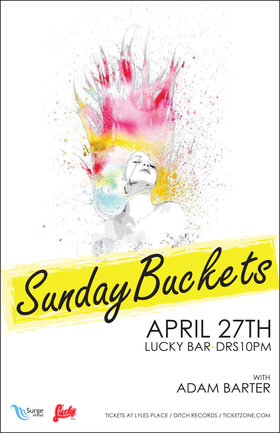 Sunday Buckets is a band in name and brotherhood. The young band of six grew up together on Vancouver Island and have been writing from personal experiences thereby giving Sunday Buckets authentic credibility. Often described as indie-pop, or indie-rock, they are a band that manages to transcend many different genres. Formed in just 2006, the young band quickly learned to play their instruments and write some great songs such as "Buffalo". Since then they have worked hard producing two great albums, In Case You Hear This (2009) and the highly anticipated release of Curious Crimes (2011). Many accolades have been passed their way and were even The Zone at 91.3fm’s band of the month for October 2009, featuring their single Aftermathematics.

It started over beers and a couple of Dave Matthews cover tunes and has since grown into a fun filled, fast paced acoustic duo that wont stop playing until your voice is hoarse and your knees are weak from dancing.

Born and raised in beautiful Victoria BC, Adam Barter and Big Paul Okrainetz capture the essence of island living with songs about beaches, BBQs, sunshine and great friends, and will leave you tapping your feet and wanting more every time they leave the stage.

Sunday Buckets is a, for lack of a better word, rock band from Victoria BC, Canada. Formed in April of 2006 they are on a quest to be funkier than most. more info
Submit info on this show to our admins