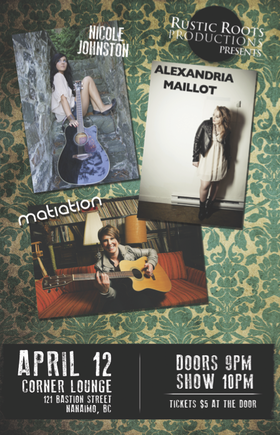 Her passion for music and writing original songs is what fuels this young singer. This young songwriter, Nicole Johnson, has been writing and playing guitar since the age of 16 and has brought her originals to the stage. After moving to the west coast she picked up her acoustic and hasn’t put it down since. At only 20, she’s performed live all over Vancouver Island, and features her original songs while playing. Nicole plans on spendingspring of 2012 writing and recording a debut CD. A style that’s folk/acoustic, she tells a story with every song. This solo artist’s unique voice and heartfelt sound will catch your attention.
http://www.westcoastrock.ca/band/nicole-johnson/

Matiation is from Southern B.C. and with the work of producer Doug Naugler (Kyprios, Gaye Delorme, and Todd Fancey). Matiation has just released her 2011 “The Ripple Effect E.P” for sale. This E.P. exposes the essence of her personal experiences, tucked into the contemporary pop genre, Matiation's “The Ripple Effect E.P.” blends youthful vocals and upbeat, eclectic guitar rhythms. http://www.matiation.com

This British Columbian teen has developed a wealth of experiences already at 19-years-young that would look impressive on any resume, including: Showcasing her talents to audiences overseas in Egypt and Romania, winning numerous competitions like the We are Listening Singer/Songwriter Awards (with numerous songs subsequqently picked up by various networks like MTV and Oxygen for pending television placements), and catching the attention of impresario David Foster and earning a spot onstage with famed singer Jann Arden during a televised concert in Toronto. http://www.alexandriamaillot.com/