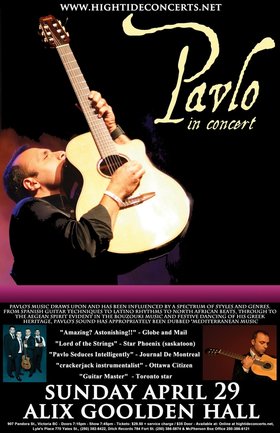 For being all instrumental, Pavlo's Mediterranean music speaks for itself.

In his 9th album,"Six String Blvd" Pavlo incorporates the world's most exotic instruments into his classic
Mediterranean sound. Influenced by his travels, you will be captured by the Chinese Ehru; the Portuguese
Guitarra; the Arabic Flute; the Indian Sitar and of course the Greek Bouzouki.

Pavlo has come full circle since he introduced his Mediterranean brand in 1998, once again recording an
All-Instrumental album. Complete with all brand new compositions, this album highlights Pavlo's unmatched
ability to melodically unite world instruments into his sound seamlessly, all the while staying true to his distinct
Mediterranean guitar signature.

It has never been more convincing, Pavlo is a TRUE WORLD artist, and has become famous for bringing every
audience to their feet.

Pavlo continues to tour worldwide performing over 150 shows per year and is still driven by his father's famous
words:

"Have the courage to do what you love, and the drive to do it well."

* PBS Special "Pavlo: Mediterranean Nights" - aired nationally by networks: Bravo and CBC Bold in Canada and
PBS in the U.S.A.
* Best Instrumental Album of the Year for "Trifecta" (2010 - Juno Nomination - Canada's Equivalent to the
Grammy's)
* Best Instrumental Album of the Year for "Fantasia" (2000 - Juno Nomination)
* Performs average of 150 concerts per year
* Half Million Records Sold worldwide
* Two Gold Albums (Fantasia and Pavlo)
* Selected and Performed for His Royal Highness Prince Charles (April, 2001)
* In 2002, Pavlo won a lawsuit against R&B Mega Stars: R-Kelly and Jay-Z. The R&B stars sampled Pavlo's
music and made a Top 10 hit song "Fiesta" based on Pavlo's original melody "Fantasia". Pavlo's actual guitar
work was lifted and placed repeatedly into the song 27 times. Pavlo now shares in the publishing of the song as
a co-writer.
* World Artist of the Year (2005)
* Billboard Top 10 (May, 2005)
* Touring Artist of the Year (2006)
* Montreal Jazz Festival - Headlined Main Stage for 20,000 + people (2006)
* Top Choice Awards 2006 "Greek Man of the Year"
* Top Choice Awards 2007 "Greek Man of the Year"
* Smooth Jazz Guitarist of the Year (2007 Nomination)
* Music Featured in "So You Think You Can Dance"; Marine Life (starring Cybil Shepherd); CTV's Eleventh
Hour;Just Cause; Showcase/Showtime L Word; The Chris Isaak Show (2 episodes)
* Pavlo owns his own line of nylon string acoustic guitars retailing online and across Canada, called "Pavlo,
Signature Series".
* Pavlo is known for giving away his guitar to someone in the audience at EVERY concert!
* Pavlo has developed his own wine: a signature reserve "Pavlo" Meritage produced by multi-award winning
winery, Mastronardi Estate Winery, located near Lake Erie's North Shore in Kingsville, Ontario For more info: http://www.mastronardiwines.com
* Pavlo is the North American Spokesperson for Batten Disease Awareness. Batten Disease is a rare and always
fatal degenerative brain disease that affects children. For more info: http://www.bdsra.org
* Pavlo organized a Canadian Guitar Trio made of himself and 2 Time Juno Award Winner, Oscar Lopez and
Rock and Roll Hall of Famer, Rik Emmett (Rock Group, Triumph). Together they composed all songs on their
album "Trifecta" which was later nominated for 2010 Juno, and they completed a national sold out tour.

For being all instrumental, Pavlo's Mediterranean music speaks for itself. In his 9th album,"Six String Blvd" Pavlo incorporates the world's most exotic instruments into his classic Mediterranean sound. Influenced by his travels, you will be captured by the Chinese Ehru; the Portuguese Guitarra; the Arabic Flute; the Indian Sitar and of cours... more info
Submit info on this show to our admins