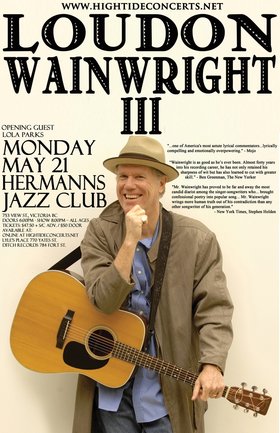 High Wide & Handsome named among the year's best per Village Voice, No Depression, FolkWax and fRoots.

"Mr. Wainwright has proved to be far and away the most candid diarist among the singer-songwriters who... brought confessional poetry into popular song... Mr. Wainwright wrings more human truth out of his contradiction than any other songwriter of his generation." - New York Times, Stephen Holden

Television acting credits include: Parks and Recreation (w/ Amy Poehler); Undeclared (w/ Seth Rogen & writer/producer Judd Apatow); Grounded for Life; Ally McBeal; The T.V. Show (w/ Rob Reiner, Christopher Guest, Harry Shearer, Michael McKean, Billy Crystal) where he played keyboard with the early Spinal Tap, which made it's first appearance on this program; a recurring role on M*A*S*H and a role as the original musician/sidekick on The David Letterman Show.